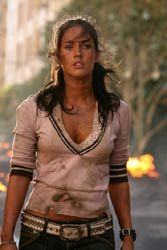 In 1985, Robert Zemeckis made “Back to the Future,” a classy sci-fi romp heavy on teenagers, absent minded professors, time travel, rock’n’roll, and a way-cool DeLorean. Michael Bay’s “Transformers,” a comic book/video game fable about robots warring on earth (it’s the Autobots vs. the Decepticons), aspires to something like the same. But classy, sad to say, isn’t in his lexicon.

The story opens in Qatar (yes), where a giant robot ambushes U.S. troops. Cut to Sam Witwicky (Shia LeBoeuf), the testosterone-challenged geek grandson of an artic explorer, the unwitting robot magnet. Seamless this is not, since Bay abhors transitions. We’re introduced to Sam’s first car, a Camaro, which turns out not to be a car but a robot, which helps him get cleavage-ripe Mikaela (sort of), but, well, it’s complicated. Meanwhile, back in Washington, or is it Qatar, the world grows increasingly robot-infested (they go by names like Optimus Prime, who is mostly good, and Megatron, who is totally bad).

The narrative is a mish-mash of one-liners, sexual innuendo, government send-ups, and tin-man special effects to the power of y. It’s a farce, sure, but refuses farce’s cleverness. Abandon a story to a toy line and the result is charm-resistant. At least in Bay’s hands. Saturday matinee material was intended to be clever, and fun. This is neither.