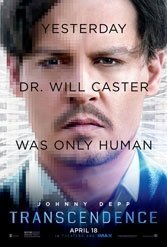 Silly science fiction tends to baby you into what it is and where it’s going. Director Wally Pfister’s film is unfortunately all too baby-like. Physicist Will Caster (Johnny Depp) is a brilliant AI guru striving to rally support behind his pet project PINN (Physically Independent Neural Network). He’s flanked by his believing scientist wife Evelyn (Rebecca Hall) and supported by devotee Max (Paul Bettany). Cometh anti-tech terrorists, led by Patty Hearst styled Kate Mara, and a lethal radiation bullet. Suddenly, Caster is a dead man in waiting, and the only way to “save” him is to download his consciousness into a jerry-rigged version of PINN. The effort succeeds, or appears to, and Caster is revived as a sentient ghost locked in his own kind of Skype.

Rebirth indeed, but is AI Caster the Caster of the Flesh, self-aware and present? “Bride of Frankenstein” Evelyn seems to think so. But eagerness for new succulent new data — to “expand, evolve and influence” — and the creation of a futuristic underground lab in a desert town would suggest that the once-noble scientist has instead morphed into a disembodied schemer of suspect intent (this you know when FBI agent says the magic words, “We gotta call Washington.”)

In all, “Transcendence” doesn’t really transcend much of anything. Behind its slick mask it’s little more than a man-become-God movie for web-dependent audiences foraging for the visionary (with a love story thrown in). Nothing’s terribly wrong with any of it, nor is anything — pace, acting and script included — especially satisfying, which is a pity since the idea of manipulated intelligence, and how its right-wrong boundaries should be drawn, is potentially fertile territory for 21st-century fantasy. Not here.