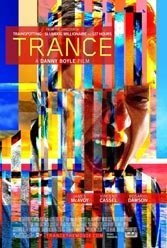 Fresh off the back of a successful Olympic opening and closing ceremony, Danny Boyle has become the poster boy for British cinema. He hit the jackpot five years ago with faux-Bollywood drama, “Slumdog Millionare, which scooped up eight Oscars. His next project, “127 hours,” was a smart set-up but failed to deliver anything remarkable. It may be fair to say that Boyle’s no genius, but he’s certainly among the most versatile directors working today, and his latest offering is no exception.

“Trance” is a mysterious criss-cross thriller about a fine art auctioneer (James McAvoy) riddled with gambling debt. When he links up with a gang to steal a multi-million pound painting, a bout of amnesia makes him forget where he put it. The outlaws force him to see a hypnotherapist to trawl his mind for the painting’s whereabouts. What comes is a nicely shot warp of psychological exploration with far more questions than answers. It kicks off as a heist film then turns into mystery, delving deep inside the protagonist’s fantasies.

There are twists and turns at every corner, with some startling sequences to make it all even harder to digest. The statuesque figure of Rosario Dawson is the only thing of beauty that endures the shadows in this dusky realm of deceit and dishevelment. With the smoky visuals, the film is certainly attractive, but little more.

Making a psychological thriller is a fine art, resting on balance. The director must finely tune tension against clarity, which is where Boyle fails miserably. The twists dilute the film, reducing it to a thin soup with iddy-bitty chunks of plot floating on top.

Boyle’s gone for art house, but he’s overcooked this picture to the point of fever pitch, unfortunately yielding a bit of a mess.