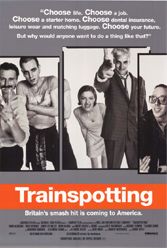 Jagged, brilliant, and mean, director Danny Boyle’s heroin movie chews through the Edinburgh drug scene like an out-of-control bulldozer. Renton (Ewen McGregor, in his breakthrough role) is a heroin addict who wants out. Easier said than done. His chew-and-spit day-to-day is populated by loquacious zombies too fried to know what they did last night, let alone an hour ago. Spud (Ewen Bremner), Begbie (Robert Carlysle), and Sick Boy (Jonny Lee Miller) are walking time bombs on a short fuse. Carlysle in particular radiates menace.

But what keeps Boyle on the right side of the Hail Heroin deep end is a cinematic devotion to human solidarity. His camera keeps the hateful brood in tune. The movie “reads” well because it defers to the uncompromising language of Irvine Welsh’s novel. You watch this like other people’s sex, intrigued and maybe breathlessly disgusted. But oh do you watch. And that’s the point. (Try this and “Requiem for a Dream” on a DVD twin bill and see if you make it through the night intact…)