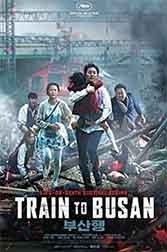 Whether you like your zombies rare or crispy, South Korean director Yeon Sang-ho has bodies for any occasion in a hackneyed but relentless horror show held together (barely) by train compartment claustrophobia and nonstop mayhem. Say this about Yeon’s zombie ambition: he believes in quantity.

Gong Yoo is Seok-woo, a separated fund manager reluctantly persuraded into taking his young daughter Kim Su-an from Seoul to Busan where her mother lives. But within minutes of boarding high-speed Train 101, the carnivorously hungry ghouls appear. Somehow, half of South Korea has suddenly been contaminated by a toxic waste-induced wave of walking deadness whose victims twitch, snarl, gobble and growl.

The rest proceeds by rote, with Seok-woo protecting his daughter in a bonding ritual that predictably transforms aloof manager Dad into desperate Dad determined to keep his daughter from harm’s way. Among his few uninfected cohorts are Sang-hwa, a street-smart bruiser with a pregnant wife, and a high school baseball player whose sweetheart is in distress. There’s also the requisite me-first bad guy willing to give up the innocents so long as he gets out alive. There’s even some sly social commentary about family values and the duties of fatherhood, with good-hearted Sang getting in most of the licks.

In the end, though, director Yoo leaves the story to his seemingly endless supply of zombies. Never mind slow motion, these dead Keystone Kops lunge and cartwheel in droves, biting off chunks of anything that moves. Dad says to daughter, “I’ll take you to your mom no matter what.” It’s her birthday, after all. An English-language version is in the cards.