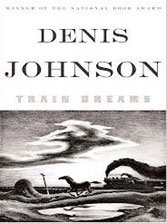 Truly strange that this introverted novella, the life narrative of a rural widower, is among the best stories ever produced by the much-decorated Johnson. That may be because it successfully combines frontier realism with the odd magic he so often injected into his early books and poems, here producing a Spartan companion to Robert Altman’s “McCabe and Mrs. Miller,” whose film graininess this book reflects in prose.

It’s the story of Robert Granier, born into turn-of-the-century to anonymity in the lost sprawls of Idaho. Granier is a worker and a drifter, a doer of what comes his way, keeping near to rail lines, the only transport available to the “hard people of the northwest mountains.” He’s a timid man who finally weds Gladys, who bears Kate, laying the groundwork for a simple life. But mother and daughter die in a great fire while Granier is out working on the rail lines.

The rest, the sour venison of Johnson’s tale, is the ghostly Granier’s glancing acquaintance with his surroundings. He sees the World’s Fattest Man, survives influenza epidemics, flies in a biplane, meets a prospector who blows himself up trying to thaw wet dynamite on a stove, escorts a man who’s been shot by a dog, and rubs up against she-wolves, whores and widows. Finally, he retreats to the cabin where Gladys and Kate perished, old Hell-fires recover into strange underbrush, and ruminates on life’s mysteries from a distance, “a sad man.”

But few are the sad men who can speak for a time when time stood still, positioned between an America of the outland and the America of the 20th-century, when planes, trains, automobiles and televisions shoved aside loneliness and mysticism. Granier is perhaps Johnson’s best and most low-keyed shaman, a not-at-all-special man — “He’d never been drunk. He’d never purchased a firearm or spoken into a telephone.” — who endures and ponders the wilderness until 1968, a laconic ambassador of a “gone forever” time, his story a tone poem to a modest Americana few have ever put to words so unpretentiously well.