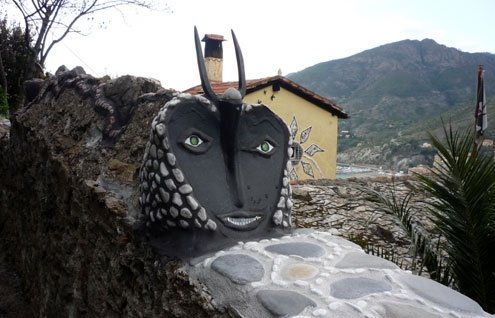 ith its 18 kilometers of mountainous coastline, turquoise bays and small beaches, the Cinque Terre is a hiker’s delight. It is a UNESCO World Heritage Site, national park and protected marine area situated on the Riviera Ligure di Levante on the Mediterranean Sea, 20 kilometers north of the city of La Spezia and 60 kilometers south of Genoa.

This April morning, rain threatens as my husband and I walk along the beachfront in Levanto, a town just north of the Cinque Terre. A hotel with blue shutters the color of a robin’s egg marks stairs to the local castle, the start of our easy hike. The road is marked “Club Alpino Italiano (CAI) number 1.” Arrows point to Punto Mesco, our first destination in the park. At the last group of houses in Levanto, a plaque commemorates where Guglielmo Marconi experimented with radio signals in 1930-1931.

At a second hotel, “Giada del Mesco” (190-meters), steps lead down to the trail that runs just below the road. Behind is the bay of Levanto and, along the coast all the way to Portofino, promontories that jut out and fall steeply into the sea. The open sea peeks through riotous gardens and olive and lemon groves.

Thousands of small, white, bell-shaped flowers of the garlic family, allium ursinum, stand upright in their leafy base. Their wild odor permeates the sea air. It mixes with the sweet perfume of wisteria in abandoned gardens.

We pass the “MareMesco” Bed&Breakfast with its fanciful decoration and garden overlooking the bay. Mosaics adorn walls and poles. Old wisteria looks like snakes and windows are made to resemble flowers. A two-pronged pitchfork and a tractor seat have been transformed into a horned and green-eyed vampire. Carved stone faces grow from the roof.

After the houses, it becomes quiet. We ascend in woods of maritime pines and larch covered in tiny white flowers. Yellow gorse blooms in sunny spots and dark violets push through clay soil. A group of German students chip at a rock wall. The stone is green-black serpentine, a solidified, metamorphic molten rock from the bowels of the earth.

Near the crest, trees give way to a characteristic mix of macchia Mediterranea — vegetation composed of juniper, heather, myrtle, arbutus and wild asparagus. A large vegetable garden, generator and rough sign for homemade wine announce the one inhabited house on the trail.

At the fork, we go right for 200 meters, following other tourists into the Cinque Terre National Park at Punto Mesco and the hermitage of Sant’Antonio Abate (313-meters).

The hermitage was once a place of solitude, a refuge for monks who also kept watch for Saracen pirates, a constant threat to the coastal inhabitants until the 1800s. Now, all that remains are the ruins of the small 15th century church. Behind it, sitting on the point, is an abandoned naval signal station, strewn with garbage and graffiti.

Irises flutter in the breeze. Below, a cliff plunges into the sea while the nearby bays cradle the towns of Fegina and Monterosso. Our eyes follow the terraced Apennine Mountains that run parallel to the coast. We count the five “lands” of the Cinque Terre — the villages of Monterosso and Vernazza nestled in inlets, Corniglia perched on craggy stone, Manarola and Riomaggiore hiding behind Punto Bonfiglio. The headlands stretch to Lord Byron’s Portovenere. The islands of Palmaria and Isola del Tino dot the farthest visible point.

Back at the fork, we descend steps on trail number 10 to Fegina. We pass the villa of Eugenio Montale (1896-1981), journalist and Nobel Prize-winning poet (1975). In his early collections written between the world wars, the solace of the Mediterranean landscape, sea and horizon of his native Liguria provide a shelter against a world of despair.

A tower, Torre dei Merli, leads us to the beach where Il Gigante, a 1910, 14-meter high, cement statue of Neptune, supports a shell-shaped terrace on an outcrop of rock. The crumbling terrace was damaged in World War II.

We stroll along the seafront and buy foccaccia. In nearby Monterosso, tourists throng. Restaurant tables fill the small piazza and make it difficult to step back and admire the rose window of San Giovanni Battista church. Bands of dark serpentine alternate with white Carrara marble on its striped façade. Inside is a wooden statue of Sant’Antonio Abate from the hermitage at Punto Mesco.

Tired of being solicited to sit in the cafés, we head away from the shops and Disneyland crowd to the Centro di Salagione in Via Servano to buy salted anchovies and pesto.

Back at the tower in Fegina, we resume trail 10 to Punto Mesco. As a rain cloud advances over the Cinque Terre from Portovenere, tourists scurry for cover but we retrace our steps on trail number 1 into the tranquility of the woods. A light shower unleashes a primordial scent of sea and earth. Dinner awaits at our hotel in Levanto.

The next morning the sun emerges. We climb through carrigiate, laneways wide enough for a carriage, to the piazza in front of the 13th century, gothic church of Sant’Andrea with its striped facade, rose window and pastel fresco above the door. It houses a silver chalice reportedly won in a chess match by Giovanni Da Passano, descendent of a local ruling feudal family, from King Henry VIII. Behind the church, there are remnants of old walls and an intact medieval castle where stairs lead down to the old port.

In medieval times, in Piazza della Loggia, ships unloaded goods, which were then transported on mule trails over the Apennine Mountains to Parma and Piacenza. Today, the 13th century loggia is a UNESCO monument of culture and peace set in a large square.

At the bay, fishermen haul up their boats with motorized pulleys, sweeping sand off the timber tracks. They wash them down and joke in the brilliant sun. The first surfers arrive. We laze on the beach and contemplate the day.