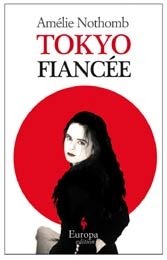 By Amélie Nothomb, translated from the French by Alison Anderson

Nothomb is a neurotic charmer too self-centered to fall in love, or so she believes. Her feelings for Rinri, the young Japanese man with whom she spends two years “is like sacred music that contaminates the soul with an élan that resembles faith but is not faith.” Her latest cross-cultural musing (a fictional reminiscence) is set in 1989 and amounts to prequel to the 1999 “Fear and Trembling,” a bittersweet account of a year spent working in a Tokyo company. That book tackled the comic and less comic of working as a foreigner in Japan. This one does the same for love.

Rinri, 21, is a shy student of French, and Nothomb, a year older, is an enthusiastic Belgian eager to plumb her Oriental past (daughter of a diplomat, she lived in Japan until age five; “I wanted to be Japanese.”). The two collide and Amélie goes along for the love of “koi,” which she defines as the worship of good company. They hang out, make love in his parents’ bed, confuse one another, and Amélie being Amélie (“a certain personal genius for awkward behavior”) nibbles congealed fondue off his fingers and gets an octopus stuck on her tongue.

She uses the affair to burrow into day-to-day Japanese idiosyncrasies, and doing so she’s often funny, touching and sweet (Rinri in a date-preamble phone call: “Hello Amélie. I am calling to inquire about the state of your health.”) The downside is her frenetic self-absorption: She climbs and venerates Mount Fuji, imagines she’s Zarathustra, nearly dies of frostbite — if she’s not a drama queen she’s certainly a presence in the court. Poor Rinri is sometimes dialed into autopilot, behaving quirkily for Amélie’s narrative pleasure. His dreams of being a Knight Templar make him the “Jesus Samurai.” To her credit, she’s never vulgar.

In French, the book is titled “Ni D’Eve Ni D’Adam” which loosely translated means not of Eve or Adam. It’s that ambiguous sexual and romantic realm, and not that of ring-wearing fiancée, into which Nothomb fits.