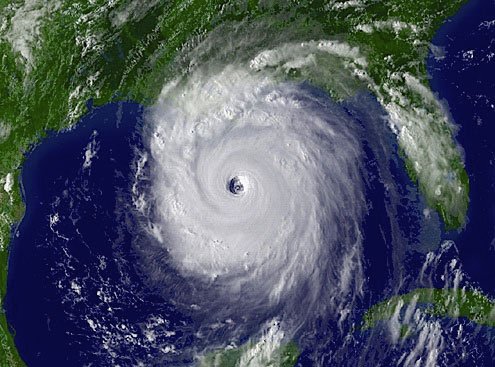 There is no Hell better than the latest one...
I

f, as Jorge Luis Borges suspected, Earth is the mother of monsters, then catastrophe is the offspring of sight.

It is, to most, unimaginable. But it is ushered like an illustrious guest into a time beset by abundant anxieties. Wordsmiths cannot find reverse tributes great enough: Hell, apocalypse, leakage, slippage, stench. New Orleans is an toxic Atlantis imaged by a hating Dante. By all accounts the vision is largely accurate.

But the forensic intesity of video is enlarging, and limitless. It compels the immediate beholding of one disaster as something bigger and worse than any before it. And no Hell is greater than the latest one.

The late Peter Jennings rationalized television’s role as an effort to make public a rough draft of history. The problem with such a draft is not its honesty but its relentlessness.

The singleness of big events lays siege to the mind. It can be no other way. Humans do not possess the detached circuitry of robots.

It will take decades, for example, to fully understand how the unexpected capturing of the New York terrorist attacks on film — and the repeating of those images — severed layers of intellectual disbelief and carried the conscious mind to irrational places it would not normally enter or submit to except in fiction.

It will take far longer to explain how the same images were transformed symbolically into a kind of Trojan keening, a collective lament of the species that persists today.

Katrina, the daughter (with tsunami) of the mother of monsters, establishes its prominence in much the same way. It is a televised wail — anarchic, poor, and paralyzing — that impresses helplessness on a middle class America already beset by war and the apprehensive urgency of foreign affairs.

Water present where it should not be is an ancient nightmare. Planes displaced into skyscrapers is a more modern one. Partake of them and you dream badly.

At times, however, the urge to effect bad sleeping seems pathological. Reporters gorge professionally (they think) in the dismay, and viewers are mesmerized. When middle class life is the norm — with parking, taxes, divorce and cancer treatment — watching the dismantling of the known in microcosmic form is an irresistibly pornographic adventure, explicit and chastening. You go there but are not there. You coax shock while denial is still possible. Meanwhile, correspondents broadcast from Hell.

That is the manipulated attraction of Katrina. To witness annihilation and its consequences from out of harm’s way is mythical entertainment whose ancestor is the viewing of gladiatorial combat and the burning of heretics. Participatory calamity is an addiction to which no one dares admit. Most prefer saying they must watch, that television gives them no choice, that they pity the victims, that they long to help. These explanations are honest but miss the iceberg.

Poe, whom Borges admired, believed that the socially unacceptable wish to know horror more intimately nibbled at the human enterprise. What was the territory like near the brink of death, or among ghouls, or on the shores of netherworlds? He best work peddled small, apocalyptic closeups.

But literature has been largely surpassed. Few seek Poe or Borges when they wish to descend into a pit. And newer Gothic writers, while popular, struggle to outstrip reality.

The narrative of fear is extrapolated from the seen. Awe is that which arises from visualizing and is embellished by the runaway spirit.

See Hell, the images say, and recognize it can happen to you. Look away if you can. Here, see, a broken house! Here, underwater, probably bodies. Imagine! Don’t turn away. If you have a God, turn quickly to that Him.

Spiritual urgings of all kinds — “Go pray, we all pray, let’s pray” — trespass seamlessly into commentary, giving awe its most common coping mechanism.

What’s less palatable is to see the whetting of a large population’s dumb appetite for disaster in the guise of instant sympathy. To convey images whose success is based on the purloined suffering of others is at best voyeuristic and at worst cruel. To impregnate the vicarious and the macabre with compassion is vain, with vanity the fertile mother of every kind of public and personal deceit.

Blame terrorist leaders up to a point for knowing how to command vanity’s vast arena. Blame television and print executives for hewing the “breaking news” drumbeat of what excites and alarms. But know, as Joseph Conrad’s dying Kurtz did, that viewing darkness can exact bad propaganda’s highest price.

Inconspicuously, you learn to want it.