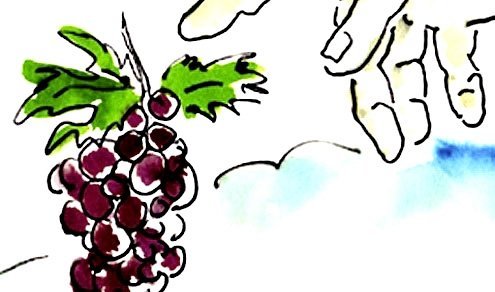 A monkey could make great wine in Italy!”|
O

n my first trip to Bordeaux in the early 1990s I visited the venerable estate of Prieure Lichine and had a memorable chat with a local wine merchant. I was tasting the very good 1986 vintage when the merchant began lecturing me in flowery and heavy-accented English on why French wines were the world’s only truly great ones.

A week before, his speech would have been superfluous; I was a dedicated Francophile. But I’d just come from Milan where I’d sampled my first (and to this day only) Barbaresco — from Angelo Gaja. The flavor still lingered on my tongue days later.

When the merchant finally paused, I offered a meek rejoinder, “But I’ve had some pretty good wine from Italy…”

He would have none of it.

That may stretch the point, but not much. Italy is one of the planet’s great wine territories. But does Italy’s capacity to coax exceptional wine from indigenous grapes warrant envy from a merchant in Bordeaux, the Promised Land of the wine world?

The ancient Greeks called Italy “Oenotria,” or Wineland, for its natural gifts. But for much of its history the gift was wasted. Italy produced large quantities of very forgettable wines.

As recently as the 1980s, pungent Chianti presented in a straw basket symbolized Italian wine. This hardly memorable Chianti dotted pizzerias around the world.

A richer tradition also exists. Some say Italy’s first legendary wine was the 1928 Bertani “Acinatico” Amarone. Other rare bottles are cited: The 1947 Giacomo Borgogno Barolo, the 1955 Biondi-Santi Brunello di Montalcino, and the 1961 Gaja Barbaresco that helped convert me to Italian wines.

One old Tuscan winemaker once told me great Italian wines were “touched by God” — blessed by climatic and geographical conditions so ideal that it hardly mattered that the technology used to craft them was crude.

But systematically producing fine wine is more challenging. Starting in the 1970s, Italian producers began investing in technology, grape selection methods, and land management. The effort has paid off. “Twenty or thirty years ago, the French joked that Italians weren’t producers of wine, just of grapes — and that some of the grapes were used to make something that vaguely resembled wine,” chuckles Simione Zanobini, who owns the Fratello Zanobini Enoteca in Florence. “Nobody makes that joke any more.”

Claudio Rizzoli, who heads Mezza Corona, the leading grower of Pinot Grigio, Italy’s top-selling wine, cites the growth of professionalism in the industry. “Italy has wonderful natural gifts in terms of geography and tradition, but in the past, we relied too much on these gifts; we didn’t work at it,” he says. Only in the last two decades, he adds, has a sense of modern enterprise kicked in.

Until the early 1970s, notes Rizzoli, Mezza Corona didn’t even own a tractor. Horses hauled grapes to the winery. Now, software predominates.

“Using computer analysis on everything from fermentation temperatures and grape selection, and aging in small oak barrels rather than cement casks, may run counter to the view of a wine maker as an artisan,” admits Claudio Nicolini, a Verona-based wine-making consultant who has worked with wine makers in Italy and abroad. “It’s not nearly as romantic as the idea of the ancient Greeks venturing across the Adriatic Sea in old wooden boats filled with grape seeds,” he says, “but the two kinds of development [technical and artisan] are equally important. Without the investments of the past 30 years, people would still be talking about Italy’s potential. Now they only talk about her world-class wines.”

Italy is graced by superior growing conditions. The weather, soil type, and latitudes associated with optimal wine production are consistently present in Italy. Most great wines are produced on land stretching between about 30 degrees and 50 degrees latitude north or south of the equator — with slight local variations. In the Mediterranean, for example, the warming influence of the Mediterranean Sea shrinks the band a little on the southern side, meaning it starts at around 35 degrees north and still stretches to 50 degrees north.

Italy has startling range, stretching from around 36 degrees north latitude (the foothills of the Austrian alps) to almost 48 degrees south (Lampedusa, near Algeria). The diversity of latitudes permits Italy to grow cool-weather grapes like Riesling and Pinot Noir as well as the light-driven Nero d’Avola and Primitivo.

Rivers flowing from mountains to seaside east or west make for a preponderance of south-facing slopes — ideal for high-quality grapes that thrive in all-day sun. Much of the Italian peninsula also has volcanic origins and retains ash, limestone, or tufa. Non-volcanic Italy generally has rocky or gravely soil, and sometimes clay — soil types beloved by wine makers because they encourage drainage. As a result, Italy cultivates 1,000 unique grape varieties, more than any other nation.

Mezza Corona’s Rizzoli believes the onus is on larger producers to buy out and develop smaller ones, effectively forcing change. “It’s no surprise that Italy’s development as a top wine country followed the country’s overall development after the war, because there was more money for investments,” says Rizzoli. “But these small producers are less interested in change, and if they wanted it, they could not afford it.”

Others disagree. Enrico Maccario, owner of the Enoteca Gradi Vini in Alba, believes in small producers. “It is true that small growers can be very resistant to changes. But in small producers you also see how the natural idiosyncrasies and individualism of the Italian character shine through.” The smaller producers may not make a commercial mark on the market, he asserts, but they can still sell their wines — and occasionally produce a great one.

For now, Italy offers the best of both worlds. Major producers furnish excellent wines, including Gaja in Piedmont and Antinori in Tuscany and Umbria. Scores of smaller winemakers, meanwhile, conjure up gems.

The best wine I’ve had this year is probably a Brunate Ceretto, recommended by Maccario. I sensed its heady flavor and round complexity would win over the American market, a thought that amused Maccario. “They only made 650 cases,” he laughed. “You bought one case. I have a few others here and some other distributors have about the same. The producer holds on to a few. What’s left to send to New York?”

Labeling is another ambiguity. Italian wines can confuse. New World wines usually state the producer and the grape variety clearly-marked labels. It’s more complicated in France, where Chardonnay lovers need to known that Chablis is made from the same grape. After World War II, most Italian wines were bottled by consortia that bought grapes from members and carried simple identifying labels, “Chianti 1965,” for example, or “Vino Bianco Italiano.”

Proliferation brought with it confusion. In some cases, Italian wines carry the name of the grape, such as Barbera. Barbera is native to Piemonte but is also grown in other regions, including Friuli, Liguria, Lombardy, and Umbria. All varieties use the Barbera grape, with the name of the producing region stated as an afterthought. To wit, Barbera d’Alba.

Other marking is far less straightforward. Take the Tuscan grape Sangiovese. Bottles labeled “Sangiovese” appear under the names Chianti or Chianti Classico. But the same Sangiovese grape is assigned to clones in Morellino di Scansano, near the Tuscan coast, and to world-class reds in southern Tuscany: Brunello di Montalcino and Vino Nobile di Montepulciano.

Yet these wines can be very different.

Try this: There’s a popular grape named after Montepulciano, the city where Vino Nobile di Montepulciano and its lesser brother, Vino Rosso di Montepulciano, hail from. But the grape isn’t cultivated there (remember, they both use a version of Sangiovese). Instead, it is made southeast of Montepulciano and is called Montepulciano d’Abruzzo. It is an accessible and food-friendly wine used as the house red in many Roman restaurants. But it could hardly be more different from its near-neighbors.

“It’s true that someone has to understand quite a bit about Italian wine before feeling like you understand anything at all,” says Nicolini, the consultant. “Most people just find the name of a red and a white that they like and they stick to that. But I think the confusing terrain makes it interesting to try new things.”

Italy got a late start in the fine wine race. In 1855, when the French drew up their legendary classification system in Bordeaux, Italy was not even a unified nation. A similar but less rigid classification protocol did not appear in Italy until 1963, when the DOC system (denominazione controllata) established quality guidelines.

Pinpointing when Italian wines rose to prominence is difficult. Exceptional vintages arrived about a decade after the major investments of the 1970s. By the time I met the Bordeaux merchant, the Italian wine renaissance was already well underway.

But where will the boom lead?

Many say Italy is now nearly on a par with France, lacking only the range and depth of the French historical tradition. The future may hinge on how effectively older traditions embrace newer ones. “Italy has so much in terms of natural resources and tradition that it can do everything,” says Nicolini. “It can make great traditional wines and wonderful New World-style wines. The future is very, very bright.”

But Florence’s Zanobini cautions against going too far, too fast.

“Creativity and innovation are important, but a wine must stay close to its history as well,” he says. “You cannot go to Egypt, and say, ‘Well, the Pyramids are nice but they would be improved with a few changes …’ If you start using unusual grape combinations and techniques you could make amazing wines, but then these wines will not be Italian.”