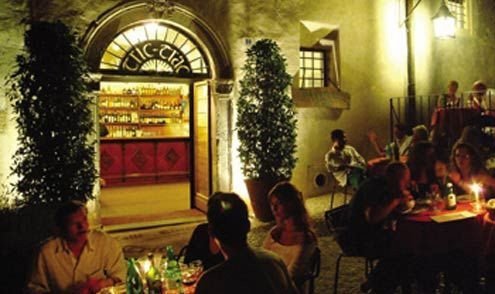 ining outside in Italy in warm weather is among life’s great pleasures. al fresco (literally, in the cool) can be in a lovely square, overlooking the sea, in a garden or forest, at the edge of a vineyard, next to Greek temples, or simply an improvised picnic. Italy offers expansive panoramas of rolling hills, beautiful people exchanging gossip in piazzas, or intimate hideaways.

Beach culture doesn’t mean greasy fries and hot dogs. Some of the country’s best chefs are perched at the edge of the water creating seafood extravaganzas, though vegetarians and carnivores have plenty of choices, too.

I’ve steered clear of mass-produced fare that is overpriced and lackluster. Here is a whirlwind tour of some favorite escapes. The al fresco spots I’ve picked all offer complete meals. Summer is peak season, so reservations are essential.

The narrow medieval road fans out into Spoleto’s Piazza del Duomo. Downhill on the piazza stands the cathedral with its eight rose windows and mosaics that dazzle gold in the late afternoon sun.

Above its elegant Renaissance portico, look for the medieval figures “holding up” the church. A theater anchors the piazza on the left. Nearby is La Rocca, the 14th-century fortress. Beyond the Duomo you see hills dense with forests and above it all a brilliant sky.

The parade of residents and visitors walking up and down makes for ongoing theater — in which you, too, play your part. Wonderful view, entertaining social scene, and good food. Perhaps a dish of saffron-flavored pasta with fresh summer vegetables, stuffed pheasant, and Antonelli’s Montefalco Rosso.

During Spoleto’s Due Mondi festival in July you might need a medieval sorcerer to conjure up a free table, so plan well ahead.

Forte dei Marmi, a gem of a beach resort town, is a playground for chic Milanesi. To the west is the sea, to the east the Apuan Alps, and slightly north are the world’s most famous marble quarries. Near the beach, behind the walls around Liberty-style villas in garden seclusion, Chef Andrea Mattei barbecues dinner by the pool in the summer. (The restaurant is open year-round.)

For antipasto, try the delicate Shrimp Imperial in a fragrant vegetable broth with fresh black truffle, or succulent triglia (red mullet) coated with breadcrumbs and accompanied by Romaine lettuce braised with anchovies and Tuscan olives. Soup of borlotti beans, farro (spelt), and a crostone of black cabbage, with expertly balanced sweet, bitter, and earthy flavors.

Homemade hazelnut bread or superb biscuits flaky from strutto (pork lard) are excellent. San Pietro al Tegame, a fish fillet, was braised with potato, a vegetable medley (zucchini, onion, tomato, fennel and a hint of garlic), black truffle, and enriched with lardo. For an intense and aromatic white wine, try Conte della Vipera Castello della Scala 2001 by Antinori. There are decadent desserts, but pear baked in red wine with its crust of dried figs and vanilla cream with nutmeg was ideal. For dessert wine, try Khamma’s golden 1999 Moscato di Pantelleria.

Montefalco is on the top of a hill in the heart of Sagrantino wine territory. This villa is tucked right next to the town wall that encircles Umbria’s “balcony” and overlooks vineyards and olive trees with distant towns in the valley and hills beyond.

This private villa was converted to a hotel, so settle in for some refined dining and sparkling conversation. Ask the sommelier to introduce you to Sagrantino by Terre di Capitani, Antonelli, Perticaia, Tamburini, Bea, or Miliziade (my favorites for the 2001 vintage) or an earlier vintage Caprai.

Apperitivi are served on the patio, so you might want to start with a local white, Grechetto, before you move on to Montefalco Rosso. Finish off with a nightcap of Sagrantino passito. Sometimes guest chefs sit in to work wonders. What else? A splash in the pool!

An Etruscan stronghold rises on a crown of tufa (volcanic rock) with its prize gem now the majestic Romanesque-Gothic Duomo in Orvieto. You can exalt in soaring walls with dramatic horizontal stripes of black basalt and white travertine.

Enzo Santoni and his son prove that you can have a great view and eat superbly. Here is Tuscan-Umbrian cooking, great architecture, and steps away, Luca Signorelli frescoes to gaze upon the Duomo reopens after lunch.

A sformatino di melanzane con vellutata al tartufo nero transformed eggplant into an elegant custard with the irresistible allure of the black truffle. The ombrichelli al pesto umbro was made with fresh coriander leaves instead of the usual basil accompanied by delectable tomatoes and shreds of parmesan. Carre’ d’agnello in crosta di pane al timo con crema di pomodoro: lamb perfectly roasted in a crust of bread delicately seasoned with thyme sitting on a delicate tomato cream sauce.

A meal by Mauro Uliassi makes Senigallia a wonderful destination. The Adriatic Sea is your view, either from the veranda outdoors or from the bright, airy interior. Champagne to begin, joined by a tray of treats — raw fish, fried shrimp cutlet, and passion fruit sorbet. More raw fish: riccione in a coconut sauce topped with lime zest (inspired by Polynesian travels) or another garnished with wild fennel, guanciale, and olive paste.

Oh, the breads! Crusty bread black with seppia ink, another of grano, or onion foccacia lightly toasted. Shrimp, asparagus, and strawberry arranged on a clear tomato gelatina. Red triglia (mullet) paired with melon and foix gras. Breasts of allodole (songbirds) in a balsamic vinegar sauce. Shrimp sealed in a mason jar in a fragrant broth of baby clams, celery, cherry tomatoes, onion, and garlic. Roast rombo had two sauces: one of topinambour, the other of lemon. Rigatoni mixed with wild pigeon and cheese sauce. Allodole, perched on toasted bread with olives. Wild pigeon, medium rare, nesting with spinach, onion marmalade, and apples in a brown sauce.

Dessert? Try ginger ice cream with candied ginger resting in a pool of cool lemon tea with mint, or pistacchio ice cream. Digestivo? Varnelli from Macerata. After all that? Nap on a lettino or take a walk on the beach.

Who would have guessed? On the outskirts of Rome, past Fiumicino Airport and minutes from beach joints in Fregene and Maccarese, you can dine under the cool shade of eucalyptus, oak and pine trees with a view of a medieval castle.

Simple Roman country cuisine on a patio where you see the castle atop a hill that slopes down to a forest of eucalyptus and pine trees. A casual and tranquil atmosphere, birds chirping, and the bliss of pastoral life. Menu changes daily based on what’s fresh. Vineyards on the property produce three DOC wines: Tarquinia Bianco (white), Tarquinia Rosato (rose), or Tarquinia Rosso (red) wine, as well as Chardonnay, spumante (Chardonnay), Merlot, Novello, and grappa.

The wineshop sells wine by bottle; the economy-minded can walk to the cantina — bring your own bottles and pay by the liter. The farm produces olive oil, honey, chick peas, farro (spelt), and other specialties. The inhabited castle is not open for public tours; grand rooms can be booked for special events such as receptions and weddings. Enchanting.

Inland from the Tyrrenian Sea, stands a Greek temple to Poseidon (“Neptune” later for the Romans), ancient god of the sea. South of Naples in the Province of Salerno, stroll through Paestum’s archeological site that once was part of Magna Grecia, when it was a busy commercial center called Posidonia. Restoration of the three major temples to Hera, Ceres, and Poseidon was completed in 2004 — a reminder that some of ancient Greece’s most spectacular temples are right here in Italy.

When you pass Poseidon/Neptune’s temple (5th century BC), it’s time to pay tribute to the god of the sea with a seafood lunch (including antipasto, pasta, and secondo) and imbibe local wines. The restaurant has been run by the same family since 1929.

GETTING THERE: Roads and trains

Getting there: Train to Forte dei Marmi/Querceta. By car, 114 kilometers west of Florence; 30 minutes north of Pisa. Autostrada A12. (Slow lane: Via Aurelia offers a splendid view of the Leaning Tower.) Unlike many beach towns, Forte dei Marmi maintains its charm even in winter. Prolong the experience in a Liberty-style villa at the adjacent elegant Hotel Byron, Tel. 0584.787.052.

Getting there: Train to Orvieto; taxi or bus to top of hill, Piazza Duomo. By car: Autostrada A1 to Orvieto exit. (Slow lane: Via Cassia SS2 to SP 71; don’t miss San Faustino in Montefiascone; try to approach Orvieto so you can see the Duomo and its spires by late afternoon sun.) Too enchanted to leave? Hotel Palazzo Piccolomini, a favorite of local winemakers, is nearby. Tel. 0763.341.743.

Getting there: Train to Spoleto, taxi or shuttle bus uphill. Autostrada A1 (from north exit Perugia, south exit Orte) to Superstrada 75. Hotel Gattapone near La Rocca offers a breathtaking view of a gorge. Tel. 0743.223.447.

Getting there: Nearest train station is Foligno.By car: Autostrada A1 (from north exit Perugia exit, south exit Orte) to highway 75. Easiest route is Foligno exit to Bevagna then follow signs uphill to Montefalco. Villa is above public parking lot and below town wall. Book the room atop Villa Pambuffetti (Tel. 0742.379.417) — the views give out toward vineyards that extend to Assisi.

Getting there: Autostrada A-3, exit Battipaglia; SS 18 to Paestum/Capaccio, follow signs for Area Archeologica. The restaurant is in the archeological dig site near the Tempio di Nettuno.

Getting there: By train, Senigallia station, walk south about 10-minutes along the shore. By car, the A14 Autostrada to Senigallia exit; head for “Centro” and the beach. (Slow lane: Flaminia SS3 to the coast and head south; or No. 76 to the coast, north to Senigallia to see Le Marche’s hills and wineries). Prolong the stay on the beach at Duchi della Rovere, with in-room DVDs plus a breakfast extravaganza with 70 tempting options (Tel. 071.792.7623).