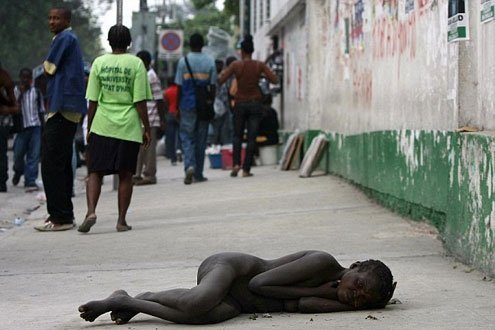 hundred Milan school children sit cross-legged on the floor as a doctor talks about Haiti. The doctor has silver hair and a silver beard. He wears baggy corduroy trousers and a slightly shabby sweater. He is soft-spoken, his manner kindly but serious. We have heard that he has 13 children and his wife wears her hair in a braid down her back.

The doctor says that on Jan. 13, 2010, a terrible earthquake killed 200,00 people in Haiti. Now, more are dying from disease. He says there is no government in Haiti. There was an election in November but no one can decide who won. American and United Nations armed guards are everywhere. Some 80,000 non-governmental organizations are active in relief work, but the situation is so bad that their efforts hardly make a difference.

The children grow restless and whisper. A teacher scowls. A toy disappears into someone’s pocket. The doctor projects his digital photographs on the wall. He says, “Look at this map. Haiti is near to Mexico, near to Florida.” He shows a bird’s eye view of the capital city, Port au Prince. We see neat rows of roofs, near the ocean. He says the streets are named for fruit — Banana Street, Pineapple Street. Hands shoot up. Children cry out, Apple Street? Pear Street? He says they don’t have apples and pears in Haiti. What about Blueberry Street? Strawberry? Peach? Teachers restore order.

The doctor points out that the fruit streets represent just a sliver of the picture. The rest of the photo, and what goes on for many photos, is just a jumble of roofs, with no streets. The roofs that exist are made of plastic bags or tin. The walls are cardboard. Many houses don’t have walls.

He says, “There is no electric light here. At 6:30 p.m. it’s dark.” He looks at the children and says, “Total darkness.” He says there are no bathrooms. You go wherever you can. He shows pictures of puddles, ponds and streams of excrement. They’re listening now.

He shows a long, long road, made from plastic bottles. He says it’s really a river but you can’t see the water.

His camera looks inside the houses: No furniture, no floors, only dirt or a concrete slab. A woman cooks something in a pot on the ground, over pieces of coal. He says it’s banana soup. The children laugh and utter a collective “Yuck!” He says there are no more trees. They’ve all been used to fuel cooking fires. In another picture, bread rolls bake in the sun. In another, a woman makes bread with sand. He says they eat sand because it’s all they have.

He shows a picture of children barefoot. Others are naked. He says it’s because they don’t have clothes. He says 700,000 children don’t have mothers or fathers. The room is silent. A boy wants to know where the children sleep if there’s no furniture? The doctor replies that some use folding beach cots. Most sleep on the ground.

A girl says, “Well, why don’t they just send a bunch of airplanes and take them all to America?” He says maybe they don’t want to leave their home. She says if they see America, they’ll want to go there. He says perhaps she’s right.

He shows a picture of a brightly painted, closed truck called a tap-tap. He says it’s a taxi that will stop if you tap-tap the side. It will take you and 20 other people across the city. They use it as an ambulance. A boy asks how much it costs. The doctor says 5 cents and the boy says he’d like to ride in one.

The doctor shows pictures of Suor Marcella Catozza’s clinic where he cared for children whose legs were puffy from lack of food. He shows rows cholera patients lying on cots with holes in them and buckets underneath. They are hooked to drip feeds with chlorinated water. He says they have diarrhea and die of dehydration. A girl asks if diarrhea is contagious. He says yes, it’s in the dirty water.

A boy asks him how long it takes to save someone. He says you never know how long it will take.

Another boy asks how many people he has saved. He says he didn’t count them but it’s a very small number compared with how many are sick. He says the boy in the picture died.

A girl asks what children do all day, those who aren’t sick. He shows pictures of kites made from garbage bags, of dolls and toy trucks made from plastic bottles. He shows boys playing cards with pieces of plastic.

A boy asks what grownups do. He says some work on sugar plantations. Some make rum, some are security guards. Most do not have jobs. They sell whatever they can find.

Someone asks if everyone is black. He says nearly everyone. They were brought there long ago, as slaves.

Someone asks if they are very unhappy. He says they are happier and more hopeful than we are here.

Two boys stand up and give the doctor an envelope with €520. They say our school made Christmas cards and sold them. The doctor thanks them.

A girl says she saw a satellite dish in the picture. Why must we give them our money when they have TV? He says sometimes people save up for years to buy something they don’t need, even when they don’t have food. Now, without electricity, they can’t even plug it in.

A boy asks the doctor if he’s happy with what he did in Haiti. The doctor says the need is so great, that what he accomplished was nothing. He says he’s happy because he received much from the people there. Our children wait to know what he received. He says goodwill and friendship.

They ask if he intends to go back again. He says yes.