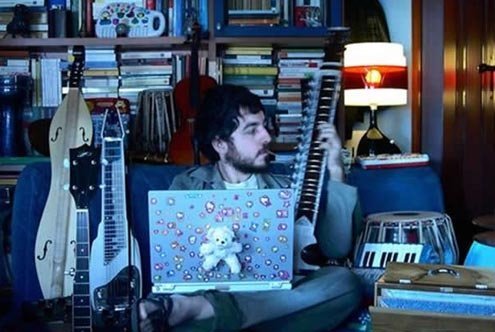 he end of the year inevitably generates a slew of lists. Favorite songs, favorite videos, favorite guitar solo, favorite snare hit, favorite piano key — on and on it goes in sets of 10 or 50 or even 100.

My own approach is less self-indulgent, which is why my own more modest 2011 list is composed of just two Italian entries. One is an album, the other a label.

Though I’ve expressed great fondness for Fabio Orsi already, my favorite album by an Italian this year was Salvatore Borrelli’s Inferno From My Occult Diary (Porter), recorded under the (etre) alias

Borrelli’s talent, and it’s a powerful one, is in marrying found sounds and home recordings with orchestral samples; distorted tapes with evil electro-acoustic work. His disparateness fashions a whole new listening experience.

Inferno From My Occult Diary, says Borelli, is dedicated in part to “the memory of all people whom haven’t voiced their life or used hands to write their existence” in the liner notes. Calling these tracks (which range anywhere from seven to 12 minutes) “songs” seems inaccurate — they are just as much meditations on memory, or the sounds of struggling to recall one’s own existence. The cover art, two photos overlaying one another, are an accurate visual rendition of what lies in store.

My favorite Italian label this year hardly released a thing, but like the Sandwell District collective last year, pursuit was part of the fun. I was just as fascinated by the lack of information or message as by the actual music.

So it is for Bologna-or-Milan-based Pup Music. Who are they and what do they want? Even Resident Advisor, ever the authority on such matters, seems at a loss.

A few of the artists have been identified – German Bastian Schuster, Abstract Theory label co-founder Francesco Bonora, Lucas Bear and Luca Bortolo. Beyond that, information is scarce. We know that since 2009 Pup has been producing absurdly limited white label vinyl 12″ pressings working strictly off bootlegs. It puts out deep house and percussion-driven techno.

But there’s no website, no Facebook fan page, no Soundclouds, no way to find this stuff online.

Well, almost no way. Thanks to YouTube and the infinite depths of the Internet, we now have a rough idea of Pup’s MO.

Bonora and FM (=Francesco Mele) were flipsides of the first 12″ in 2009. Bonora’s “Kro” was a wild techno-meets-psychedelic afrobeat jam. Mele’s “Dre” threw a jazzy horn sample over some loose drums that un-minimalize vintage-era Ricardo Villalobos. It was the start of something beautiful.

Though 2011 saw just one 12″ release, PUP005 was a doozy: Dubbing out a sample from Lionel Richie’s “All Night Long,” FB/MM turned 10-minute A-side “All” from a propulsive house pounder a la The Field into an arms-aloft Ibiza crowd-pleaser and back again.

BU/LO’s “Jam” on the B-side lives up to the name with a James Brown live sample asking, “When we say get up, what do we mean? Get on up… Get up and jam… Get up and party… Are you ready?”

You better be. Pup Music may not have much out, but their low-key approach has been one of my treasured finds this year. Here’s hoping their list of releases grows a little bit longer in 2012.