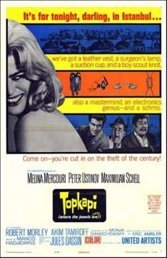 Director Jules Dassin’s jewel of a movie is in no hurry. It’s about eccentric people as much as robbery, and hinges on an infiltrator. Ustinov won a Best Supporting Actor Oscar. There’s also a wonderful score from Manos Hatzidakis. Two years after this, Dassin married Mercouri. He died in 2008 at 96.