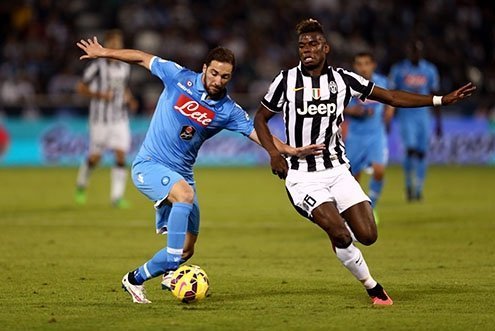 hether in sport, battle, or any competitive pursuit, it’s usually smart to weaken your rivals. To do so at no cost to your own side — that’s genius.

Juventus’ handling of this summer transfer window epitomized the Turin club’s decade-long shrewdness. That decade began painfully in 2006, when the team was relegated to Serie B after the calciopoli match-fixing scandal. Fortunes changed in 2011, and since then Juventus has dominated Serie A, winning five straight domestic titles.

This summer’s deals make the gap between Juve and the rest of the pack wider than any time in recent memory.

The club was a party to two of the year’s costliest European transfers. On July 26, 2016, it paid €90 million to Napoli for the services of striker Gonzalo Higuain, last year’s top scorer. Higuain had an extraordinary season with 36 league goals and was emphatically the league’s standout player, leading Napoli to a second-place finish behind Juve.

But for a 28-year-old player, the price tag — then third highest of all time — raised plenty of eyebrows. Despite Higuain’s growing cult hero status in Naples, it was an offer that Napoli simply could not refuse.

After acquiring Higuain, Juve needed to balance its books — which it did swiftly. On Aug. 8, midfielder Paul Pogba was sold to Manchester United for €105 million. The transfer vaulted to the top of the most expensive list, eclipsing Gareth Bale’s move to Real Madrid in 2013 (€101 million).

It’s difficult to grade the impact of Higuain versus Pogba on the field because they play different positions and are at different career stages. Pogba is a freak-of-nature who outruns, out-finesses, and overpowers while chipping in with about 10 goals per season — impressive for a midfielder. At 23, he could get even better. Higuain’s repertoire is more straightforward: goals, lots of them, and of all kinds.

In terms of value, it’s pretty easy to argue that both deals were overpriced — Higuain because of his age and Pogba because his contributions aren’t always palpable. All of the other players on the top-5 all-time transfer list (Bale, Ronaldo, Higuain, and Suarez) score at least in the vicinity of 20 goals per season, if not far more. Goal scoring is the most important individual attribute in the game, and it seems incongruous for the most expensive player to not be a goal-scorer, first and foremost.

With Pogba, there’s also the question of commitment. He’s been criticized for drifting out of games on occasion, including during France’s Euro 2016 campaign. His poor performance in the final, a loss to Portugal, puzzled most media.

Pogba’s low-key Euro performance was qualified by his being played out of position to accommodate the rest of the roster. Then again, you’d expect the most expensive player in the world to be the focal point of his team’s strategy.

Football is far from a logical sport and its finances aren’t either — especially when many national leagues are involved. Rather than selling Pogba to a domestic competitor, as Napoli did with Higuain, Juventus turned to the Premier, which is in a cash-fuelled feeding frenzy. Manchester United is the richest club in the world’s richest league. It just sold its domestic broadcast rights for a record £5.14 billion ($6.9 billion). On the back of several mediocre seasons and with Jose Mourinho newly installed as manager, United wasn’t going to let Brexit deter it from splashing some euros.

While Juventus probably overpaid for Higuain, the team was reasonably confident someone would overpay more for Pogba. And while Higuain’s departure from Napoli is highly likely to peg back its Serie A rivals, Juve won’t have to face Pogba this season in the Champions League, with Manchester United failing to qualify. And with its five consecutive Serie A titles in the bag, there’s no question Juventus is now putting the European trophy ahead of domestic honors. Swapping Higuain for Pogba signals the intent to win now instead of later, and evokes memories of Inter using the sale of Zlatan Ibrahimovic to finance a team of veterans capable of breaking their Champions League hoodoo. Inter, then coached by Mourinho, was the last Italian Champions winner in 2010.

Juve have also acquired Miralem Pjanic from Roma, last year’s third place team, thus taking a major chink out of another rival’s armor. The deep-lying playmaker helps fill the creative void left by Andrea Pirlo’s departure at the end of the 2014-15 season.

Barcelona stalwart right-back Dani Alves was signed on a free transfer, center-back Mehdi Benatia loaned from Bayern Munich, and newly acquired Croatian winger Marko Pjaca is one of the continent’s highest-rated young players at his position.

The Juve roster is two-deep with quality at every position, and it’s no exaggeration to think its second-string could win a league that seems to have one super-team and 19 pretenders.