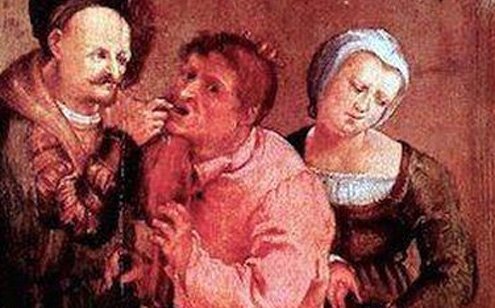 ave you heard the one about the Italian dentist? You go to get your teeth cleaned and end up having to come back every Monday for six weeks so he can “fix” cavities you didn’t even know you had.

I was sitting in the dentist’s chair this morning trying to keep my mouth open while thinking of a topic for this month’s column. I struggled. Then again, I’ve gazed up my dentist’s nose so many times I’ve memorized his nasal cavities. It’s not a relaxing kind of familiarity.

We’d reached the point when the good doctor was applying airplane glue to one of my non-existent cavities while shoving five different instruments down my throat.

My small stature and youthful appearance often encourages elders to treat me like a child — this same dentist once applauded me for being well behaved in the chair. I’d like to say it has to do with British stoicism, but I can’t. I’m still traumatized from our first appointment when he caused my entire left cheek to swell up because he clearly hadn’t been practicing his hand-to-eye coordination.

Or perhaps it was because he was too busy complaining to his assistant about the alarming crime rates in our small Tuscan town, population 7,000.

Oh, haven’t you heard? The streets of Harlem have nothing on us. Shit is serious here. So serious, a friend in neighboring town expressed concern. “Things are terrible in your neck of the woods aren’t they? It’s all the kids. They just have nothing to do.”

I guess that means we’re being overrun by disenchanted youths with a penchant for crime. Oh mercy! Won’t someone save us?

Yet in the 10 years I’ve lived here, I’ve never seen our police captain give anyone so much as a fine. I have seen him walk past cars that were literally parked in the middle of the roundabout and not even blink. But he does work hard on his appearance: he compensate for his shortness by wearing tight pants and massive avatar sunglasses.

As for crime, the infamous act of the last past decade was when someone spray-painted slanderous comments about my husband on the “Welcome to…”road signs.

That Matteo Renzi-wannabe whom I also call my beloved is a member of the local council and not always particularly popular, something the town “sheep” should remember next time they let him do whatever he wants. At least that’s the message the graffiti artist wanted to get across. If only he’d known that my husband was born on the same day as Italy’s last dictator, Benito Mussolini. My pet name for him is Il Duce… and Rabbi (short for Rabbit).

Now then, if being a hypochondriac were a criminal act, my home would be a penal colony. Every single person who lives here will suffer from acute fever at least once this winter. They will also come down with unexplained stomach pain and rush to the hospital in the middle of the night at least three times. Such is to be expected from a nation of people with an individually tailored laundry list of indigestible foods. My mother-in-law is particularly prone to the terrors of peppers and celery. Living in place where nine out of 10 residents remember the days before the invention of the automobile may admittedly have something to do with it.

Yes, there may be a few bad eggs among the nonagenarians, but to say we have a problem with crime is laughable. I’m probably our worst offender. I sometimes, maybe, when no one’s looking, steal hydrangeas from pots in the Old Town. They’re just so pretty. Don’t judge me!

If I’ve learned a thing or two about small town Tuscan life it’s that the locals aren’t happy unless they’re complaining. It’s the opposite of what you’ve always imagined. They don’t boast to anyone and everyone about the fantastic state of things. Instead, they whine about the inconsequential (and the non-existent) because that, my friends, is infinitely more satisfying.

I just wish they wouldn’t do so while I’m drowning in a pool of my own saliva because Miss Dental Assistant isn’t doing her job with the mini-mouth vacuum.