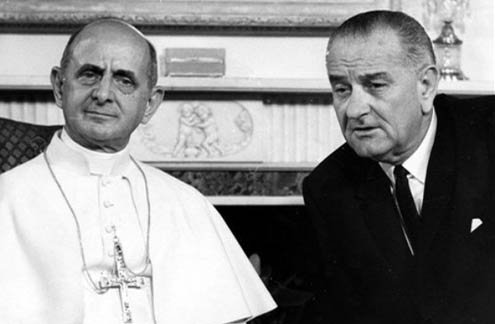 Pope Paul VI with President Lyndon Johnson: No to "...any action which either before, at the moment of, or after sexual intercourse, is specifically intended to prevent procreation..."
M

y father was a New York disc jockey and radio personality. His passions were post-war popular artists like Tommy Dorsey, Lena Horne and Tony Bennett. When rock ‘n’ roll took off, his heart wasn’t in it so he switched to talk radio. One evening I heard another talk radio host with a call-in show begin his program by saying, “I think they should round up all the cats in the world and drown them.” Listeners who called in did so with fervor, some in ecstatic agreement, others angrily opposed.

My Dad said it was a classic ruse. When a guest canceled, or the day’s news was flat, a host could go after dogs or cats and the phone lines would light up immediately, electrifying the show. The ruse took advantage of gullible audience members and done in jest, was a way to pass the time and with luck entertain. No harm done.

Going after the gullible has a long tradition and we’re all susceptible to hot controversies. Gun control, capital punishment, same sex marriages and abortion come to mind.

These issues are hot for a reason. The response to contentious positions, whether they concern the rights of animals or people, tends to be extreme, obliging those who raise them to do so with a responsibility of purpose. It’s one thing to intensify debate with the aim of seeking rational solutions, quite another to inflame emotions with disingenuous assertions. Which brings me to the current American debate over religious freedom and access to contraception.

The U.S. Supreme Court, in its 1965 Griswold v. Connecticut decision, struck down a Connecticut state law forbidding the use of contraceptives by married individuals. The 7-2 majority decision reflected a belief that the law violated “the right of marital privacy.” The Court majority said that such privacy resided within the “penumbra” of the Bill of Rights. Justice William O. Douglas, writing for the majority, said the Court was “…dealing with a right of privacy older than the Bill of Rights or political parties”.

The dissent found nothing in the Constitution to forbid the legislation, but did agree that the law was “asinine.” Wrote Justice Potter Stewart for the dissent: ” … as a philosophical matter, I believe the use of contraceptives in the relationship of marriage should be left to personal and private choice, based upon each individual’s moral, ethical and religious beliefs…”

While Griswold applied to married couples, the Supreme Court’s findings were extended to apply to all adults in its 1972 decision Eisenstadt v. Baird.

This line of cases presented a unified judicial position. Both Constitutional “originalists” and those who interpreted that document more freely held to the principle that the individual, married or single, should be free from unwarranted governmental intrusion into such a fundamental matter, namely whether to have children.

The Roman Catholic Church took a different view. In 1968, Pope Paul VI issued the “Humanae Vitae” encyclical that re-affirmed a longstanding Church ban on “…any action which either before, at the moment of, or after sexual intercourse” that is “…specifically intended to prevent procreation…”

Despite the Vatican stance, Italians use contraceptives widely. They can be purchased freely in pharmacies, in street dispensers, and even in check-out lines at many supermarkets.

As they did with abortion, Italians have found a working peace with their religious institutions. Moreover, national government doesn’t meddle in the sexual lives of the country’s population.

From an American perspective, the nation’s highest court has unanimously protected an individual’s right to use contraceptives, Church law forbidding their use has fallen on deaf ears, and almost all American women have used contraception at one time or another. Moral and ethical beliefs cannot be legislated. Game over.

Yet despite judicial history and certain proof of public will, some persist in waving the religious freedom banner in the face of President Barack Obama’s health care bill, which requires employers to cover the contraceptive costs of employees.

Religious freedom in the U.S. is expressly protected under the First Amendment. Religious institutions, bolstered by the church-state separation argument, are well within their right to claim protection if they believe their positions are threatened. Politicians who back such protection are also understandable when their positions promote sincerely held moral and ethical beliefs.

But incendiary rhetoric is another matter. Using it in the name of religious freedom or against contraceptive use not only undermines previously hard fought legal protections (as well as their societal acceptance), but also breaks down efforts to take the debate to a higher middle ground.

The recent case in point of a well-known talk show host accusing a student of being a “prostitute” because she favored government funding for contraceptives is nothing but scorched earth rhetoric. It drives another harmful wedge into an already deeply divided American debate and its political landscape.

It may be talk radio, but its entertainment value is zero.