Too many and too close 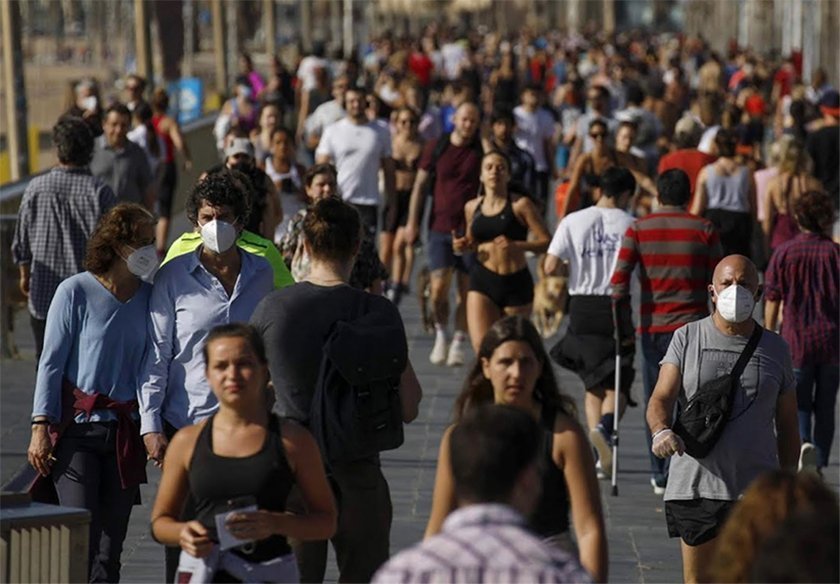 Barcelona's early May reopening brought out droves, and they were anything but socially distant.
E

ncouraged by a steady drop in the number of severely ill COVID-19 patients, Italy unlocked its citizens for the first time since severe restrictions went into effect seven weeks ago. Starting May 4, they were allowed to take their kids outside to enjoy springtime in parks (the weather is already summer-like in Rome). They could also call on close relatives and even get into their cars and drive (if they still remembered how), whether to a local hiking trail or to the shore, not to sunbathe but just to see the sea again. All well and good, if only the vital need to keep other people at more than arm’s length had been respected, and mostly it wasn’t. This is where science and emotion butt heads with the latter usually winning out.

The rules of Italy’s so-called Phase 2 specifically call for maintaining social distancing whether outdoors or in.

But that’s been pretty much set aside. Italian television showed children and grandchildren joyously embracing their relatives without a single word of caution about the need to stick to the distance rules no matter what (hard, I know, but necessary).

A friend in Spain gave me a similar account of what happened there on the first day of eased restrictions. Shopping streets were packed and people were out in droves, with and without masks, mothers and their children, too. Many images looked like any other pre-virus spring day, but even more crowded.

Germany, whose policies had been less severe than those of Italy’s and Spain’s from the start, decided to restart its suspended soccer season in empty stadiums. The first games will be played May 16. Italy and Spain are expected to follow suit, while in the U.S. two suspended seasons, pro basketball and hockey, remain on hold. Baseball, which managed to run through two world wars and had been scheduled to begin its season in late March, has delayed its opening day indefinitely.

Germany’s decision to restart soccer was upheld even after the league got wind of 10 positive virus tests from players on two major teams.  Those players will be excluded from rosters for now, and the others, who tested negative, will be retested regularly.

Germany and Austria are taking taking baby steps toward reopening the entertainment industry, not generally considered a priority. The theater, music, and dance worlds are in a state despair. No symphony orchestra or opera company can afford to perform in semi-empty auditoriums with the few people present separated by four or five seats, not to mention whole empty rows. It makes little sense financially and almost none artistically. It’s different in art museums, where the major task will be to enforce distancing. A painting doesn’t breathe on you.

But as the wife of a musician and the sister of an impresario, I get the feeling (perhaps too optimistically) that venues and artists may be willing to absorb the financial losses – better a little income than none at all – rather than keeping those red curtains closed indefinitely. Maybe venues could allow performers to work for free. They could also apply that to spectators who hold COVID-free certificates, good for a week after a negative swab. Or they could come with immune certificates, good for a month after a positive blood test. Just a thought.

I wish Americans were close to a Phase 2, but they’re not since some places didn’t have anything resembling a strict first phase. Some of the messages I get are chilling. A friend wrote on May 1, “I just live in [a state] where most people still believe this is all a hoax and Democratic plot to make [Donald] Trump look bad, so they’re the ones protesting and going to rallies… I am bombarded every day with their newest pick for ‘expert’ doctor who tells them this is all a big lie and meant for billionaires to [vaccinate] us all and… I don’t know… control us?”

Still a hoax after nearly 80,000 deaths? At first I refused to believe people could be so stupid. But then I reminded myself that the divide between thinking in California and New York and some other parts of the country is wider than the Pacific Ocean and that 40 percent of American adults are convinced the earth was created less than 10,000 years ago, complete with human beings – and dinosaur bones.