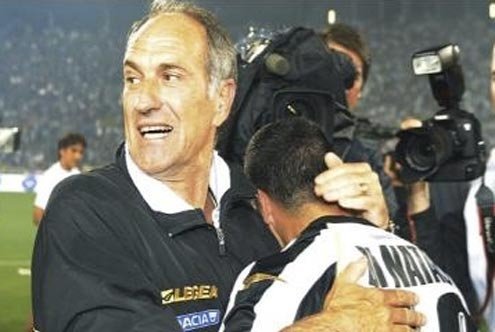 Plenty of cheer: Guidolin has made Udinese a serious contender for Champions League qualification.
T

he proof is in the pudding. Serie A has become remarkably competitive. Udinese and Lazio find themselves in the upper echelons of the league table. The latter has been in a rich vein of form since October, when it exorcised its derby demons and registered its first win over city rivals AS Roma in three years.

Meanwhile the club from provincial Udine boasts the division’s strongest home form of 10 victories from 12 fixtures as it continues to stay hot on the heels of table-leading Juventus and AC Milan. Could these teams join or even displace the established elite in years to come, you ask?

Rather regrettably, the answer is no. The paucity of Italy’s Champions League places certainly doesn’t help.

Before the current season, laziali and friuliani alike could only have dreamt about such lofty league positions as late as February. Though both clubs enjoyed strong campaigns the previous year (Udinese even claimed the fourth and final Champions League spot), neither boasts a squad with much strength in depth. Their transfer budgets are completely dwarfed by those of Italy’s northern triumvirate of Juventus, Internazionale and AC Milan.

Success had to be the product of tactical excellence of wise old heads Edy Reja and Francesco Guidolin, matched by a formidable team spirit, which has seen Udinese overcome the summer sale of star players Alexis Sanchez and Gökhan Inler with consummate ease. Meanwhile Lazio’s team spirit has shone through the disappointment of Djibril Cissé’s quickly curtailed stint in Rome.

In any other Serie A season, both clubs would be confident that their sterling efforts be rewarded with qualification for Champions League football and thus the opportunity to open the door to fresh riches and create the incentives necessary to attract the kind of player whose only wish is to be a member of a team competing on Europe’s center stage; in short, the opportunity to begin to close the gap on the old elite and engender solid legacies for years to come.

Yet it’s almost certain that either Reja and Guidolin is headed not for immense satisfaction but bitter disappointment. Ever since UEFA withdrew Italy’s fourth and final Champions League spot, which now belongs to Germany’s Bundesliga, Italian clubs have been wary of the frenetic rat race that would come with seeking Europe’s Holy Grail.

The first two places are widely expected to be sewn up by Juventus and AC Milan, two footballing institutions, leaving just one vacancy, for which Udinese are making the most compelling case.

In previous years it would have been impossible to imagine both Inter Milan (the Champions League winners in 2010) and AS Roma having to settle for places in UEFA’s second-tier competition, the so-called Europa league. Even that isn’t a certainty at this stage. Meanwhile Napoli, last season’s success story, will need to win the Champions League in May if they are to make another appearance next term as titleholders.

Napoli’s struggles to match their achievements of yesteryear epitomize those of a side unaccustomed to fighting on more than one front. Their remarkable qualification to the Champions League knockout stages from a group that comprised Bayern Munich, Manchester City and Villarreal seems to have sapped them of every ounce of energy for Italian turf battles.

Napoli is the classic case of a strong first-team that lacks the depth necessary to cope with a lengthy fixture-list. Unless blessed by opulent owners, as in the case of Paris Saint-Germain, real strength in depth is normally the product of annual appearances in the Champions League. While the prize money certainly helps (Napoli will have earned approximately €10 million for reaching the knock-out stages), it’s the competition’s prestige that attracts the game’s best talent.

If Napoli fails to win the Champions League they’re likely to lose their best players, including top goal-scorer Edinson Cavani. If he does leave, only further managerial mastery and team spirit will allow the team to taste Champions League football again.

By contrast, AC Milan has long been immune to such concerns. Injuries to players as important as Antonio Cassano, Alexandre Pato and Kevin-Prince Boateng would have dented both domestic and European aspirations of any club outside of the established elite.

Whether Udinese or Lazio prevails in the hunt for third place, next season will present more daunting challenges, as Napoli’s predicament illustrates only too well. Rather impressively, both sides have reached the Europa League knockout stages. Playing abroad on the Thursday night before a Sunday league match is a tall order, especially when the starting 11 barely changes. There’s scarcely any margin for injuries, certainly not of Milan’s proportions.

Reja and Guidolin would be wise to concentrate their efforts on the league if they are to arrive in the Promised Land of European football. It’s just a pity that next season will also revolve around the same objective. Udinese or Lazio can be impressive, but just how often can you honestly expect them to finish in the top three?