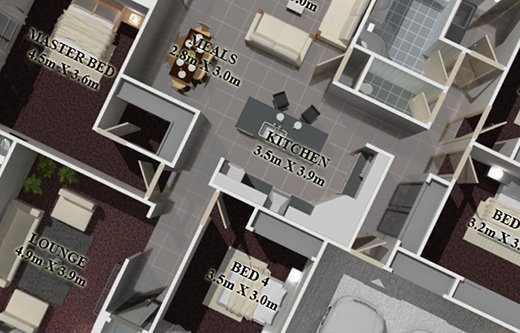 One room, never mind one is a dark basement, is a bad start to a relationship plan.
W

hen it came to men, my late mother was always quick with this axiom: “Just remember that they can’t be good in all the rooms.”

It was her way of appealing to compromise when it came to dating. I should remember that no one was perfect. She deemed me far too picky.

“Of all those millions of people in New York City,” she’d despair, “there must certainly be one good man.”

I tried telling her how dating was different in New York than in other places, but the comment made no sense to her. I repeatedly contended then, as I still do now, that a good man is hard to find.

A recent blind date that wasn’t is proof of what I’m up against.

Bill was good-looking, active, and loved the outdoors. A woman acquaintance had suggested we meet. Although she didn’t know him well, he looked the part. I was game, and she gave him my number.

The next day, Bill sent me a text. He seemed eager to meet for a drink and wanted to arrange a place. While I was replying to him, my phone rang. It was Bill.

“I thought I’d just dial you and talk in person. Figure it’s easier to decide this way.”

His voice was strong and confident, with a southern twang.

“Nice to meet you, Bill,” I ventured. He didn’t return the salutation.

“Yeah, I’m just off work. Four o’clock is pretty early in my business. Usually it’s later, mostly due to all the waiting around.”

“I’m an actor. I was doing a fill-in gig today. I do commercials; play extras, whatever I can get. I just don’t say ‘no’ when someone calls me up for work. “On days like today, when it’s so hot, lots of people might not want to work. But I don’t complain. I just show up.”

I didn’t know what to make of all that. Was he a hard worker or desperate?

Had I heard right? He lived in a room in a dark basement? Did he not consider how that might sound to a prospective date? I suppose not.

“What do you like to do when you’re not working?” I asked.

“I spend time at the beach. I usually ride my bike and go for a swim. I stay active. I need to look good. I also take my camera and shoot photos. Right now, monarch butterflies are migrating. I have some great shots of them. I can send you a photo or two.”

He asked me about my work and I told him about leaving my job of 18 years to study art. I mentioned I was learning the classical drawing style of the old masters and hoped to move onto painting oils at some point.

“You can paint one of my butterflies,” he replied. “I’ll forward one to you when we get off the phone.”

I tried telling him the curriculum at the school didn’t allow working from photos, but he was unmoved.

“How is it that you can study art? Are you making any money at it?”

I explained I had spent years working on a financial plan. I had lived below my means and saved. This had allowed me to turn to art.

“I know exactly what you mean by living below your means. I rent a room in a house. It’s in the basement and I don’t get much light, which is why I head to the beach so often. But it doesn’t cost me much and that’s the upside.”

Had I heard right? He lived in a room in a dark basement? Did he not consider how that might sound to a prospective date? I suppose not.

“So, where do you want to meet tomorrow?” he asked bluntly. “We both live in Brooklyn. Maybe somewhere downtown?”

I took a deep breath and replied carefully.

“Bill, I don’t think meeting for a drink is such a good idea. Seems we don’t have much in common.”

After an odd silence he simply stammered, “Oh.”

Seems I’d taken him by surprise.

“But I do wish you good luck in finding someone,” I added.

“Alright then, goodbye,” he said abruptly, and hung up.

With the phone still in my hand, all I could hear was my mother’s axiom.

“Give a guy a chance. He can’t be good in all the rooms.”

But I think in this instance, my mother would have agreed with me. She may be right about not rushing to judgment, but it will still take more than one room to get my attention.