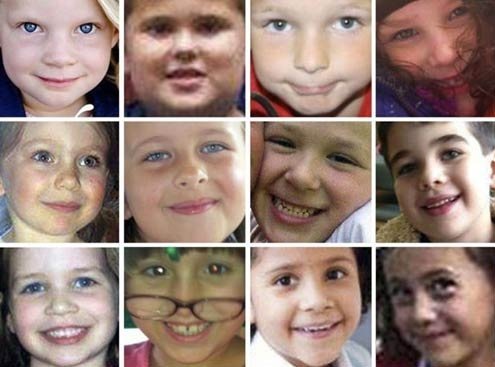 hen I pulled off the highway into my small Connecticut hometown, not a speck of snow lay on the winter-browned ground. The occasional withered leaf clung to a sharp-elbowed branch; the air felt damp and cold.

In the past, the gloom would have been cheered away by beribboned wreaths, green garlands, and strings of lights.

The only sign of Christmas, at first glance, was a series of paper candelabra on the church green that spelled out the word “HOPE.” But it hadn’t been written to celebrate the holiday.

What the candles and the augury referred to instead was the massacre that had occurred, just two days earlier, in the town next door to ours.

I was in New York City when I heard the news. A journalist friend saw it online first. “Do you know a town named Newton?” he asked me, pronouncing it, as even the president did, like a fig cookie. (Within hours, that mispronunciation would disappear from the lips of anchors and politicians, a small, sad sign of just how important the small city of 27,000 had become in the collective consciousness).

I shook my head, then nodded, brightening. “Oh, Newtown? Yes, of course. It’s right next to my town.”

His face fell. “Look at this,” he said, and showed me the report he was reading. “26 dead in school shooting in Connecticut.”

My response was instant, like so many others around the world: shock and horror. But for me, the shock wasn’t just about the sense of loss that any major tragedy, even those very far away, can instill.

This was a town I was connected to.

My mother and stepfather’s house stands six miles from Sandy Hook, as the crow flies over forest and lake; eight, if you’re driving the tranquil backcountry roads. My mother does her grocery shopping in Newtown. A local schoolteacher, she once interviewed for a job at Sandy Hook Elementary, where the shootings occurred.

The massacre touched us, and so many others in the community, directly: A family friend’s sister was one of the teachers killed in the attacks.

Now, American attention is focused on Newtown. Initial probing has already revealed one strange fact: the National Shooting Sports Lobby, the second most powerful gun lobby in the nation, is headquartered in Newtown.

Guns are hardly unknown in this part of Connecticut. While visiting my parents at home during hunting season, I’ve heard occasional shots ringing out in the woods behind their property. On countryside walks with the dogs, I’ve noticed signs tacked up on trees warning against trespassing and hunting. But in my four years attending high school here, of all the times that I spoke to friends about what they’d done on the weekends, or what their plans were for Thanksgiving break, I don’t remember anyone ever saying they’d gone shooting with Grandpa (or with Mom). Guns simply weren’t a part of the conversation.

When school shootings happened, as they did with increasing frequency, they always seemed very far away. In the eight years I attended high school and college in Connecticut, school shootings killed more than 70 people across America. None had taken place in our small, leafy state. While everyone logically knew that each of the places where massacres had occurred stood for Anytown, America, it still was easy to feel, relatively, safe.

I was a college senior in 2007 when a student went on a shooting spree and killed 33 people at Virginia Tech, the deadliest such rampage in U.S. history. Though the horrific news shook us all, few entertained the idea (or chose to) that something similar could happen on our campus.

And that, of course, is part of the problem. As much as grief can bind distant strangers to communities struck by tragedy, there’s still an element of distance. Unconsciously, people prefer “Thank God it wasn’t our town…” to “That is our town, because it’s any town…”

So maybe it wasn’t enough that a massacre occur at a Pennsylvania school for Amish children (2006; six dead), or at a renowned university (Virginia Tech), or at a suburban Colorado movie theater showing an action flick (12 dead). Maybe it had to be in the kind of bucolic New England town featured on postcards — a place where, as one Newtown native wrote for NBC News, “It’s not unusual for the police blotter of the town newspaper, The Newtown Bee, to feature a car hitting a deer”— for the dimensions of the event to hit home. Perhaps it had to take not five, not 10, but 20 little kids to be lost for us to really feel that it could happen anywhere. That it could happen to us. To our children. That something has to change.

Or maybe not. Maybe, for those not touched directly by the tragedy, life will simply return to normal. Debates over gun laws will trickle off. Congress will adjourn for the holidays. Questions about how to protect us, and our children, will just be kicked further down the road, for another time and another tragedy.

But this Christmas, my hope that things will change, that they must. It’s a hope all of us touched by this tragedy have in common.

Because there’s something uniquely gut-wrenching about opening my local newspaper, which I’ve been doing every morning since I’ve been home, to find an obituaries section usually dedicated to octogenarians filled instead with the faces and heartbreakingly short life stories of six- and seven-year-olds.

— If you wish to help Newtown, ABC News has compiled this detailed list of organizations and charities.