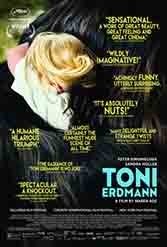 Only two people matter in German director Maren Ade’s unsettling and highly acclaimed “Toni Erdmann.” One is Ines Conradi (Sandra Hüller), a low-affect German businesswoman based in Bucharest whose key task seems to be convincing clients to outsource oil industry jobs. She’s smart and competent enough, but she lacks a moral center — referred to as “character” in the 19th century. Accommodating, earnest, and empty, Ines is the kind of person who tells her bosses what they want to hear. She occasionally does drugs and dabbles in perverse sex, but her life lacks spontaneity and genuine passion.

There are shades of Paolo Sorrentino’s “La Grande Bellezza” and its predecessor, Fellini’s “La Dolce Vita,” though both of those films focused on alienated men and explored the deficiencies of a social class. This instead is a harsh look at the behavior and values of women in business.

The second person of substance is Ines’s wacky father, Winfried Conradi (Peter Simonischek), a divorced music teacher who decides to visit his daughter in Bucharest. He dons a scraggly wig, ugly false teeth, and introduces himself to her as “Toni Erdmann,” though she knows better. He soon morphs into a Shakespearean fool, speaking truth to Ines from the sidelines. Among his disguises is that of an eccentric therapist or life coach, a Merry Prankster trying to get Ines “on the bus.” Toni has more than enough “character” to go around, and his forthright mission is to humanize his daughter (“You have to do this or that, but meanwhile life is just passing by…”)

This could be the perfect setup for endless conflict, as Ines becomes irritated and angry at her father’s interference. But it doesn’t quite play out that way. Although Ines is sometimes embarrassed by Toni’s presence and antics, she seems to understand she may need what Toni offers. Indeed, Ade’s movie sometimes feels like a father-daughter buddy film. Later scenes show her perhaps coming around, embracing — albeit awkwardly — the whimsical. She colors some eggs, sings a song and hosts a small party at which she and her guests are naked. That’s enough by itself, of course, though Ines’s full conversion would seem saccharine, and unbelievable. Beneath the surface, this is not the comedy the trailer seems to promise. Instead, Ade has made a surprisingly subtle, even troubling film.