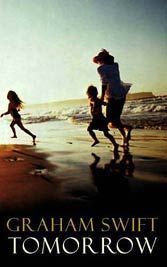 “From the start,” says 49-year-old narrator and art dealer Paula Hook in a ruminative confession to her sleeping twins, Kate and Nick, “you saw two faces looming over you that you took to be your parents, and why should you not have taken them as your model?”

Swift’s ninth novel endeavors to answers the question and pose others, mostly about the nature of blood ties. In fact, the entire story is structured as a maternal preface to an announcement (“Bombshell Day”) their biologist father, Mike, will make to the 16-year-old twins the next day, hence “Tomorrow.” Swift sets his story in 1995 London, as if to place himself outside time.

It’s also a backbreaking work of sustained personal narrative, Paula’s. She possesses secrets that can’t be shared, “my testimony in advance,” she says. Her voice is the novel’s whole tone, which makes it an extended bedtime story (often melancholy) about middle class family love and the silhouettes of belonging (“A ‘happy home’: that’s an inherent misnomer perhaps…”) To say more is unfair to Swift’s dexterous navigation.

If there’s a flaw, it’s reader yearning to get beyond Paula and portent. Even Otis, a black cat named after Otis Redding, seems at times like a breath of fresh air.