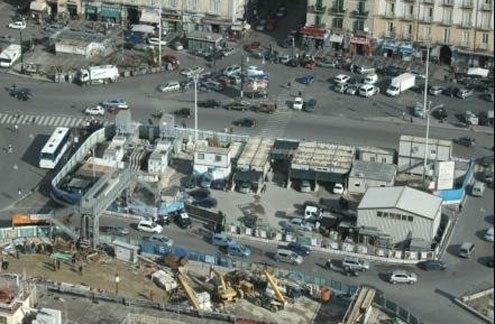 Piazza Garibaldi in Naples: Trying to rein in a cluttered and off-putting gateway.
T

he city of Naples has an image problem that starts with Piazza Giuseppe Garibaldi, which is home not only to the city’s central train station but also to a collection of aggressive street vendors and to reams of unruly traffic. The rivers of cars make it nearly impossible for uninitiated tourists to cross the piazza with baggage in tow. Those who try often find themselves preyed on by unsavory characters peddling items that may or not have been pulled from the trash.

It’s a serious problem because the train station is a hub for travelers passing through Naples on their way to Pompeii, Capri and other nearby tourist destinations.

The piazza lived up to its bad reputation on my own first visit to Naples in 2007. Hardened by the rumors, I assumed the Italian men eyeing me (and my dozen female classmates) were out to steal our bags. I told them off. (Looking back, I suspect they just wanted to talk to a bunch of American college girls; but at the time I was convinced their motives were more sinister.)

Though I’ve since grown convinced that the Garibaldi horror stories are wildly exaggerated, the truth is that I often tell visitors to the city to ignore what’s around the train station and press ahead to the more beautiful parts of the city.

That’s why my latest visit to the pizza produced a shock. I saw what looked like progress, namely a modern, Frank Gehry-like structure rising up behind construction barriers and diverted traffic.

Perpetual fencing and intermittent news articles suggested that work was underway, but I never expected to see anything come of it during my time in Naples. Digging subway tunnels in 2,000 year-old cities tends to yield architectural treasures that then have to excavated and protected, slowing down even the most essential infrastructure projects. (Just ask Rome.)

But the Garibaldi makeover looks real. Naples officials are planning a large mall-like complex that will connect the train station to planned extensions of the city’s metro lines. They also plan to direct vehicle traffic through a central artery, filling the rest of the piazza with a park and a metal and glass complex intended to cover the entrance to the metro platforms.

“Great,” I thought when I heard about the plan. In 20 years time, long after my three-year stint is up, I’ll be able to come back to an improved city.

But then came the unthinkable: signs of acceleration. The city just opened a new metro station on Via Toledo in the heart of the center that I never expected to see finished. The Piazza Garibaldi project is scheduled for completion in 2013.

For the first time, I’m inclined to put my doubts aside and actually believe the target dates.

Throughout 2012, the city has been in overdrive. The streets are cleaner than I’ve ever seen them, apparently the result of shipping tons of refuse to the Netherlands. Mayor Luigi de Magistris, 45, has resisted protests from angry drivers and business owners and continued his lungomare traffic ban, leaving the waterfront thoroughfare open to pedestrians and bikers. Earlier this month, the city launched an electric car sharing service in its downtown, the first of its kind in Italy.

I didn’t think the electric cars existed until I saw one while attending a recent Davis Cup match staged on the Naples waterfront. While ordering an espresso at the tennis club bar, I also ran into the mayor. It was raining, and I told him how it always seemed to rain in Naples when international events came to town. (It poured during America’s Cup World Series races in April.)

I thought I was being nonchalant, but De Magistris would have none of it. “We must not say that,” he replied in Italian. “The sun will come.”

I then remembered that predicting anything negative in Naples is usually met with, Tocca ferro, or “touch iron,” the Italian equivalent of the saying, “Knock on wood” to ensure good luck.

De Magistris doesn’t seem to like doubt. Though many criticize his new traffic restrictions, De Magistris, a former prosecutor, also has his share of national fans. At a journalism conference in Perugia last April, I unexpectedly found myself behind hundreds of people waiting to attend a panel discussion he was part of. I couldn’t believe such a large number of non-Neapolitans would take an interest in what the mayor of Naples might have to say, but they did.

In the city, I hear people applaud the mayor for having revived international interest in Naples and improving its reputation abroad.

That’s all well and good, I think to myself. But my friends who arrive at Piazza Garibaldi still take one look outside and want to run for the hills.

If Naples can complete its Garibaldi gateway work, all that might change. People might venture out more. They might make it down to the seafront and enjoy a walk or a bike ride, pausing for a bit in Naples instead of bull-rushing Pompeii or Sorrento, maybe taking in one of the many cultural events that waterfront and neighborhoods now have to offer.