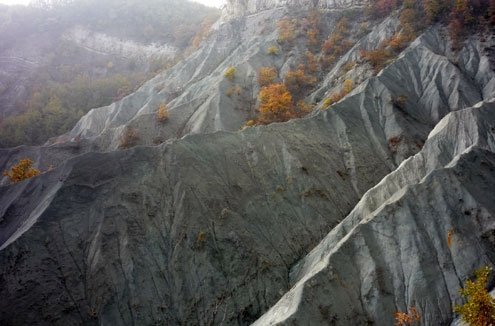 ainy-day hikes can lift my spirits. Today I’m going to Oltrepò Pavese in an area of Lombardy near the medieval town of Varzi. It’s an easy 430-meter climb-and-walk that takes about three hours and runs over woods, gentle hills and calanchi, badland-like gullies.

The Oltrepò Pavese is in Lombardy’s Pavia province and borders the wine-rich Piedmont city of Alessandria. Varzi is in the upper Oltrepò, removed from the Pò River (Oltrepò means “beyond the Po”) and nestled in the Staffora Valley, in the foothills of the Apennines. Here, salami lords over wine. Nearby Emilia is rich in meat-curing traditions, so is Liguria, whose sea air sweeps over the mountains. The region’s salt was transported to the Lombardy plain through passes.

To get to Varzi from Milan, my husband and I take a train from Milan Central Station to Voghera, where we board a linea ARFEA bus to Varzi. We ask the bus driver to let us off at Casa Arcano (between Casa Massone and Ponte Crenna), a group of houses on state road SS461, about five kilometers outside Varzi. Here, we take a road that crosses the bridge to Casa Galeotti (363-meters) where we walk straight up the hill and past the houses until the pavement becomes a dirt road.

At the first fork, a sign on a tree makes us groan. Boar hunt, Saturday 31 October 2009. Today! We turn left and two minutes later see the first “sentinel” hunter in a bright orange vest. He carries a rifle and a walky-talky. We stop to ask about our chances of being shot at. He immediately warns other hunters of our presence. He has some 30 companions in the hills, with dogs keeping the boars on the move, pushing them to a small circle for the “battuta,” the kill.

As we walk through autumn woods crisscrossing the border of Lombardy and Piedmont, we see more “look-out” hunters and trampled earth under scrub — signs of boar. We hear dogs baying. We see a vehicle on a road to the right. This is the Via del Sale, an ancient, mercantile trail from Genoa in Liguria, named “The Salt Road” after this precious sea mineral. Cloth, spices, metals and gems also traveled this route but today its haul is three dead boars tied to the front of a SUV.

As we head up a hill, the trail disappears but tracks lead into a field. At the top (762-meters), the terrain changes quickly. Trees grow on soft, crumbly marl — a mixture of clay, sand and limestone. Soon the land has little protective vegetation.

We descend into ravines — the calanchi di Nivione, formations of hill erosion suggesting the Badlands of South Dakota on a small scale. Intense rain in an otherwise dry area creates deeply-cut grooves in the land. The morphology is found throughout the Apennine Range.

There’s good traction on the wide trail but dust rises with each step. It’s a powdery, grey moonscape. Looking up, we see blade-like ridges and small gullies of arid, friable rock worn away by water.

As we climb the calanco, we see a hamlet of stone houses. Another hunter explains that over the next ridge is the hut of “Primula Rossa” — the nom de guerre of World War II resistance hero Angelo Ansaldi. I wonder if there’s a connection between the disciplined hunting and partisan history.

We follow the trail to Casa Bertella, a village overlooking the Staffora valley. Cats sleep curled together in a furry heap. A woman explains that all the men are hunting. “It’s our tradition. Our great, great-grandfathers did the same. The boars cause such havoc.” Boar feed randomly on roots, nuts, eggs, and grass, sometimes ruining farmland.

We continue to Varzi crossing the bridge over the Staffora River in Via Generale Maretti. We turn right into the Strada Circonvallazione (ring road) and walk straight to the bus stop to check the schedule to Voghera.

Varzi has ancient Longobard and Ligurian roots. In 993 A.D. it was controlled by the powerful Abbey of San Colombano of Bobbio. But by the 14th century, as the Malaspina family and the Salt Road grew in importance, it emerged into a flourishing town. While the rest of the Italian peninsula broke up into city-states, Varzi remained a feudal oasis and fiscal paradise with its own administrative statutes. It was later brought down by family strife and criminal violence. In 1797, Napoleon abolished all fiefdoms and annexed Varzi to the Cisalpine Republic.

We amble through narrow lanes, past churches and under towers to the castle. The aroma is medieval. Outside the center, we walk to the restored, Romanesque-style Church of the Capuchin Friars in Via Cappuccini. First documented in 702 A.D., the church passed to the Capuchins in 1622. But Napoleon closed the religious community in 1802 and the church was a barn for a hundred years.

While sipping tea, we listen to an elderly woman and the bar owner exchanging views about the merits of Varzi salami — large grain, wine-red, tender versus firm. We can’t resist. We have some.