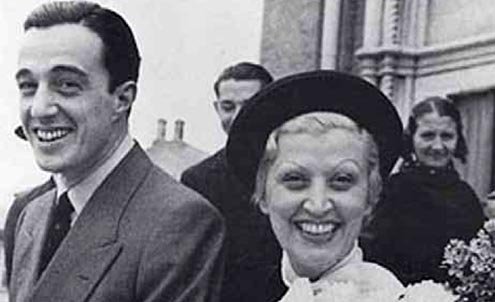 Giuditta Rissone and her then-husband, Vittorio De Sica, after their 1937 Asti wedding.
B

earing children in the kitchen is not uncommon in Italy. The vibrant core of every Italian household is the stovetop. Whether it’s an 18th-century peasant hearth or sleek appliances positioned near a designer island, the kitchen is where Italian families gather and where relationships are forged. These relationships are cultivated early on in life and leave young children with indelible memories.

My earliest recollection of food making is tied to my maternal grandmother Giuditta Rissone, my nonna. Known as Titta to everyone in the family, she was not the average nana. She read me fairy tales, baked cakes and occasionally knitted. But as a young woman she had been a talented, successful and beautiful theater actress. Her childhood was worthy of a novel.

Born into a family of teatranti, “theater people,” in 1895, Titta began touring the world with a company formed by Ermete Zacconi, a leading actor of his day, along with her parents and brothers. At age two Titta was forced to get a bowl haircut, dress trousers and play only boys’ parts. Her father was the trovarobe — a do-everything version of a set designer. He was in charge of painting backdrops, collecting furniture, set dressing, props, and so on. His wife, my great-grandmother Luigia, was a seamstress. She designed all the costumes for each production, and was in charge of cutting, stitching and fitting.

Every summer, this wild assortment of talent headed for South America, where the company performed mostly for Italian immigrants in Argentina, Chile, Paraguay and Uruguay. Titta never spoke a word of English, but thanks to these annual six-month tours, she was fluent in Spanish and grasped rudiments of Portuguese.

Once the overseas season ended, the company would pack its staging equipment and steam back to Europe, just in time for winter in the northern hemisphere. Titta loved summer because she’d spent so many childhood years on the other side of the world.

When Titta grew up, she became a leading lady in many 1920s stage productions, some of them extremely popular. She acted in Greek classics, Shakespeare, and witty contemporary pieces. In 1930, she met my grandfather, and together they formed a company. She married him seven years later. My mom was born soon after, finally giving Titta a chance to retire at age 42.

Her reprieve didn’t last. Her separation from my grandfather (divorce didn’t exist in Italy in 1943), World War II hardships, and the burden of being single mother led Nonna Titta back to acting. She starred in 25 films, mostly in the 1950s. One of her final roles was in 1962, as Marcello Mastroianni’s mother in the Fellini masterpiece “8½.”

Long before it was customary for working moms to bring income to the household, Titta did just that. She was a key figure during my upbringing. She was also great company, a playful, unconventional, tender and funny companion. We’d often play role games. I’d introduce her to my latest child (I had many dolls at the time) and we’d chat and gossip like ladies over teacups of sugared tap water. She spoiled me like only grandparents can. She also taught me to appreciate good food through her virtuoso cooking skills.

Titta died in 1977, soon after my grandfather, whom she still loved deeply. I was 10 at the time, a delicate age for a pillar to crumble away forever. I miss her.

To this day, when I’m distracted by life’s many curve balls, I find myself seeking solace at the stove. As I cook with a flurry of preoccupations in my head, I often automatically reproduce Nonna Titta’s recipes and involuntarily replicate those everyday gestures of love I grew up with. To feel especially close to her and all she personified, all I need to do is pop the lid to a jar of concentrated beef extract and set a pot of water to boil. The combination of aromas and textures triggers a potent madeleine moment. I’m suddenly projected back in time to the house I grew up in, I am standing on a chair at the kitchen countertop, watching her melt spoonfuls of dark, tar-like beef extract in a small boule of water and melted butter. We’re making her signature pasta all’estratto for lunch.

As the salted water rolls to a boil, we toss in a fistful of salt and about 400 grams of spaghetti or vermicelli. She lets me stir it occasionally. A few minutes before draining the pasta al dente, we spoon out some starchy water and melt two tablespoons of beef extract paste (Liebig or Maggi Swiss) and half a stick of softened butter with it in a small bowl.

Tendrils of aroma waft into my nostrils, and I close my eyes. I can hear the 1970s telegiornale news jingle playing from the Grundig TV set in the other room. Nonna’s coquettish smile and twinkling emerald eyes with golden flecks appear in a flash.

Breaking from the reverie, I look down at the bowl. I notice that the new age spots on my skin are just like Nonna’s. Her ring, which I wear on my right hand, catches a beam of midday sunlight. I dress the drained pasta with the butter and extract blend, and dust with not too much grated Parmigiano Reggiano.

The outcome is a rather unattractive platter of slippery gray-beige noodles. But don’t let looks fool you. With every fork twirl and each mouthful, I’m embraced by the tender if fleeting memory of the past itself.