To the heart of anorexia 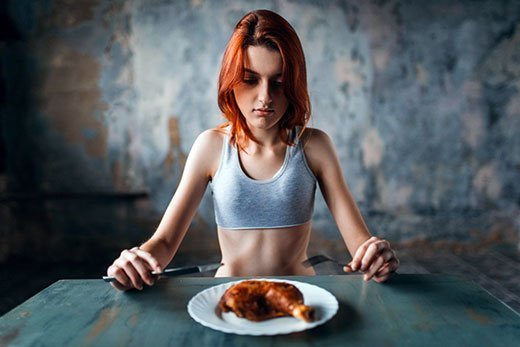 few years ago I suffered chronic stomachaches. Concerned about their cause, I paid a visit to my Rome doctor, who asked a lot of questions and conducted a thorough exam that included pushing and pressing on my internal organs. After that came X-rays and a gastroscopy. The results showed both a stomach inflammation and a hiatal hernia.

Had my doctor chosen instead to follow the equivalent of the DSM — a frequently applied psychiatric compilation of diagnoses — she would have been required to follow standard protocol and grill me on my symptons in checklist-style. My replies would have very likely led her to conclude I suffered from a non-specific stomachache disorder, since that’s what the symptom said. Focusing on that symptom only, she would have recommended a painkiller and bid me good-bye.

But I doubt any doctor, even someone far less rigorous, would have been comfortable letting “stomachache disorder” and painkillers stand as diagnosis and “remedy.”

Yet internal medicine and psychiatry exist on separate building blocks.

In medicine, a diagnosis is typically based on knowing how an organ is intended to function, in what way it is malfunctioning, or deviating from its normal operation, and, above all, determining what’s causing the deviation.

In medicine, a diagnosis is typically based on knowing how an organ is intended to function.

Symptoms are just a sign that something’s wrong. In the case of the stomach, possible causes of pain include gastritis, ulcers, cancer, and, of course, hiatal hernias.

Turning now to psychiatry, let’s assume a teenaged girl (it could be a boy) is losing too much weight. She’s also refusing to eat, and is taking on a skeletal look. Her parents might take her to a doctor, who might suspect a so-called “eating disorder” and might suggest a psychologist or psychiatrist. In many cases our hypothetical patient would be asked a series of checklist questions designed to identify her symptoms and determine how long she’d been suffering from them.

Most likely the diagnosis would be anorexia.

Now then, we all know about anorexia, right? That it’s an “eating disorder” like bulimia.
If that’s in fact how the girl were diagnosed it would be the equivalent of telling me I had a stomachache disorder and dispatching me to the drug store.

This takes us back to square one, since eating too much or not eating at all, like the stomachache is just a symptom, not the problem that underlies it.

Symptoms too often distract us. They become a core around which we weave easy explanations, often losing sight of the bigger picture. Simplistic thinking makes an appearance: Anorexia makes people skinny; models are skinny; probably our girl is trying to imitate models.

A simple way of dealing with the causes of anorexia is just to blame mass media, which picks out who’s pretty and who’s not.

So yes, imitating models can be a part of a symptom. But it’s not the cause.

It’s not what made the girl decide not to eat in the first place.

Someone might also look at it another way and say the girl doesn’t even know she’s skinny, which makes the problem one of knowledge and self-awareness. That person might think she just needs to face reality.

Yet what these kinds of explanations lack is any understanding of the patient’s feelings. At its core, psychology is about what people experience, and what they feel. So what, then, is the experience of the anorectic? We know what the person with the stomachache feels. About the anorectic we know only what she does.We must know her story, since most of those with the symptom we call anorexia share a similar one. They feel that getting love is conditioned on being perfect in one way or another. Such an idea doesn’t come casually. In some cases, parents transmit strong but implicit messages about their expectations of a child, at times unaware. Such messages can have a huge and harmful impact.

Most parents love their children and want the best for them. But some have suffered through bad experiences of their own and may not be aware of potential fallout. Many children in such situations are “good” kids by any standard — they’re smart, attractive, excel at some sport, get top grades, and are solicitous to the feelings of others.

But at some critical point they come to believe, often without being aware of it, that they’re not loved for who they are but what they do. They want to rebel, to take hold of their lives and their bodies. So they take action. In the case of anorexia, they stop eating.

These sudden and noticeable physical changes gives them a sense of agency.

The way media portrays celebrity fashion models may be a part of the story, or it may not. The problem has any number of symptoms.

If I haven’t been loved for who I am but for what I do, I may constantly seek admiration, or do so well in some other arena, that my worth — as I perceive it — can’t be denied. Or I might fail to achieve such perfection and, as a result, become depressed. This is, admittedly, a rather basic way of illustrating something that, when applied to individual cases, is far more complex. Anorexia is certainly more complex than my portrayal of it here. Stomach pain isn’t usually just stomach pain. You have to dig deeper.