To the Back of the Beyond 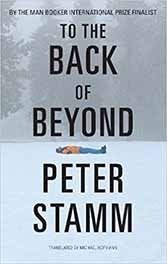 By Peter Stamm, translated from the German by Michael Hoffmann

In a Swiss alpine village, loving husband Thomas takes an evening break from his devoted wife Astrid and the couple’s two small children just after the family returns home from a vacation in Spain. It’s a stroll and he won’t be but a moment. But it’s not that at all. Thomas’ walk is the beginning of an odyssey that will overturn the present, revise assumptions about the past and shape (if not warp) the future.

Stamm’s reverse love story — since estrangement makes the heart grow fonder — concerns two people, both in their 40s, who’ve led normal lives until an ill-defined existential tremor alters the human landscape. It is also a tale of marriage, breakage, memory, double lives, and competing visions of what fulfillment means. Rival versions of what’s transpiring shape separate narratives — Astrid’s grounded in instinct (“The tiniest detail, the least circumstance was enough to split reality in two, in four, eight, sixteen versions, into an unending number of worlds…”), wandering Thomas’s in dreaminess.

After Thomas departs, Astrid bypasses official explanations to seek solace in “facts that wouldn’t be translated into any reality.” Thomas, crafted into his own rocky solitude, “a new world that had come into being overnight,” also skirts around the real. Shouldn’t stable family life and lovely children stir happiness enough to deter radical change? Not for Stamm’s characters, who face a “future that was not prescribed and that could, with every step, be altered.”

Stamm’s Thomas and Astrid each have one foot in the ordinary and other in a fluxing, contemplative place that puts impulse ahead of logic and the mysteries of human communion before social protocol (“Not everything you did had a reason,” says Thomas.) Convention is limiting.

This is a subtle, probing novel that portrays two people entirely affected by one choice, Thomas’s exile, portrayed by Stamm as a near-feral nomadic need, with Thomas reflecting on “the migrations of animals, the movements of birds and fish from continent to continent, movement all over the world,” an impulse he considers a “more natural mode of being than settlement…”

In common with much of Stamm’s work (which rarely ventures far from provincial Switzerland), it is moving in the way it gradually confers the routine with a dimension that is at once socially insubordinate and devotedly spiritual, Astrid and Thomas aglow in the keeping snow.