To Reach the Clouds 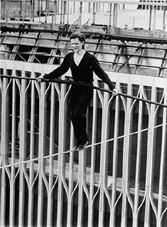 Petit on the wire between the towers.

Of all the nonfiction associated with the Twin Towers (most produced after 9/11) this is unique. On August 7, 1974, the day before Richard Nixon resigned, 25-year-old French juggler and performance artist Philippe Petit jerry-rigged a high-tension cable between the unfinished north and south towers of the World Trade Center —1,350 feet above street level — and walked the 138-foot (42-meter) distance eight times over 75 minutes. He also lay down to peer at the sky.

Petit recounts the genesis of what he and his half-a-dozen accomplices called “the coup” in a deeply moving account that redefines ambition. He calls himself “a wild cat” taking on “the towers I love,” a reverence that grows as his secret project takes shape. Petit, whose prose is luscious, self-involved, gripping, also furnishes stunning photos taken by his eccentric cohorts. One shows the bewildered faces of street-level bystanders. Their gazes are eerily similar to those caught during another event, years later (“Wall Street stops counting and looks up,” he writes; “they look at me as in submission.”)

But Petit honors 9/11 by mostly leaving it out. He’s more concerned with the “outlaw felicity” of the moment. His 20-page retelling of the actual crossing transcends poignancy and graduates to awe: He talks to “gods in the wire-rope” above “the unfathomable canyon, my empire.” Heady is too modest a word. “Does one escape victorious from a dream forged at such height?” asks Petit.

And perhaps no story better honors the memory of the WTC than this one. It is too little-known.