To love or detest 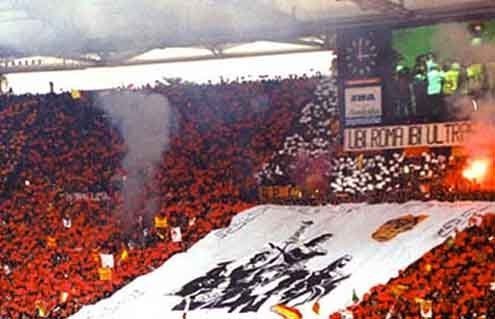 The Curva Sud, home to Roma's most ferociously militant fans, tends to see civility as a sell-out.
I

once knew a man called Mr. Loveable. He had a son called Ercole, Hercules. In the late 1980s, Mr. Loveable was a Rome carpenter and Hercules his assistant and errand boy. Each time I saw them the surly Hercules behaved unhappy and chafed at his subaltern status. He clearly didn’t want work for his father and wasn’t even good with wood.

One day Hercules explained that his real vocation was that of extremism. When I seemed perplexed he told me he was a section leader among the Ultras, AS Roma’s most rowdy stadium fans. He referred to his team not as Roma but as La Magica, the Magic One. He and his rabble-rousing cohorts spent days preparing for their times in the Curva Sud, the curved southern bleachers of Rome’s Olympic Stadium where they stood or sat by the thousands on game days. That part of the stadium was traditionally reserved only for hardcore fans. They were the Fascist Black Shirts or ultra-leftist Black Bloc acolytes of the Italian sports world, rage merchants dedicated to a one-sided calling. Fans in Italian are known as tifosi, which has come to me rooters but has its origins in typhoid and the delusion-making fever the disease it was known to produce. Typhoid and malaria were common in Rome through the early 20th-century, claiming tens of thousands of working class dead.

Hercules was especially feverish when Roma played the city’s rival team, Lazio, in what was known as the “derby,” an English term that drifted south because early clubs were British, and Italian clubs copied their culture.

On derby day, Hercules ensured his platoons would outshout and if necessary outfight Lazio’s equally feverish Ultras, appropriately positioned on the other side of the stadium, in the bleachers of the Curva Nord. Throughout the game the rivals swore loyalty to their own side and shouted insults at the other. Before and after the game they often brawled. I once went to a game with Hercules and left reeking in police teargas.

Between the two “curves” were saner fans, intense but more moderate, partisan perhaps, but also in watching the game itself. Their cheering was often drowned out by the Ultras who had spent weeks if not months honing tribal rage. Sometimes police battles with the Ultras led to severe injury, even deaths. The Ultras lived for any kind of confrontation. It was lifeblood that allowed them to escape the drudgery of daily life. The carpenter’s assistant Hercules actually became someone for a while.

I have not seen or hear from Hercules or his father for decades. The master carpenter would now be over 100 (if he’s even alive) while the son would be in his mid-50s To some extent, they were just two ships in my long Rome night.

But I think of Hercules often these days in terms of the increasingly boorish American political scene, one that symbolically resembles the rumblings from within a football stadium. In one set of bleachers are progressives and liberals, periodicals in hand, hectoring and hating every aspect of the Trump presidency to the point of obsession. This addictive and addicting fever is reflected in big-city daily newspapers that should take greater distance but no longer bother.

The other “curve” meanwhile revels in its newly acquired power but behaves with equal fury and disdain, trying in fact to whip up more of the same, ready at all times to pronounce its own infallibility and maybe even pick a fight — a real one.

The two sides bellow at each other ceaselessly, the cat-and-mouse game of politics and governance (never mind the public good) all but set aside to make way for irrational dedication to opposing loyalties.

Like the Ultras, both American sides have taken an oath never to give an inch to the other, let alone compromise, making for near-permanent enmity and a refusal to capitulate to the difficult but ultimately wiser concept of fair play.

Hercules once told me about the time his father hired an outside locksmith to handle a jammed door the two were had to remove. It turns out the man was a Lazio fan. At some point, after Lazio had defeated Roma in the Derby, the man told Hercules, “Better luck next time,” who responding by spitting at him and was sent home by his father. Finishing the door had to be postponed.

“What do I care,” he told me. “I had my priorities straight. People like him deserve that and worse. We hate them, and hate is hate.” So it is.