To Have & To Hold 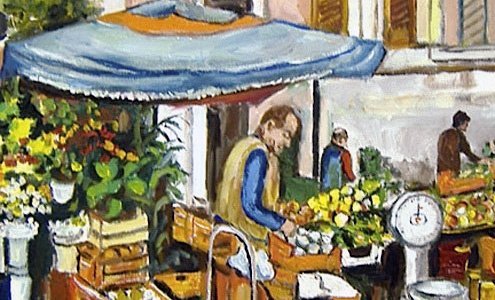 #8220;You ask me how it is living in exile, friend — what can I say? That I’m too young for bitter protest and too old for wisdom or acceptance of my Destiny?”

— from “Eavesdropper” by Breyten Breytenbach

This was my first summer outside of Italy in three years. Three years might not sound like a long time, but for a girl who’s lived in six countries by age 26, home is anywhere you’ve ever had a mailing address. It’s been a bungalow in Karachi and a flat in Dubai; a five-story walkup in the West Village and a suburban pre-fab in Richmond Hill, Toronto. Home has been a friend’s couch in Florence and a terracotta jewel-box in Cortona; a corporate seminterrato in Pisa and a quirky bilocale in Prati.

Some homes are harder to leave than others.

Anyone who’s lived and loved the proverbial bel paese knows that the only thing harder than living in Italy is walking away from it. Italy is a dream that when you settle into it makes you think hard about what you’ve done.

It does that with departure as well.

It’s been more than three months since I moved “back” to Montreal — with “back” being a colloquial way of explaining the general feeling of returning to North America. I’d never lived in Montreal before. I only chose it because if I couldn’t have Italian, then French would have to do. But even here — in what Gourmet magazine calls “North America’s most European city” — the New World differences are familiar. Cars are bigger, wine prices higher, and delivery comes quicker. (There is delivery, period.)

Ninety days out and I still sleep badly. Not because of my new (and seemingly gigantic) apartment; I’ve grown used to the new-fridge noises, and the different cadences of faraway sirens. I wake at least once every night, sometimes from a nightmare, other times from nothing I’m aware of. I race the dawn to fall back asleep, and often the dawn wins.

The silliest things overwhelm me.

A minute in front of the supermarket yogurt aisle can reduce me to near-tears — why so many choices? A so-called “barista” gets my two-dollar caffè macchiato wrong, and I suddenly hate it all. A bottle of Antinori’s Santa Cristina costs $15 plus tax, and I want to hit someone. Every day, for reasons mundane and sundry, I look around and wonder what on earth I’ve done leaving a place I loved. “Better career prospects” is a hollow comeback.

It got so bad that I dreaded grocery shopping. This was problematic since the only pro-Italian therapy I could muster, and that still helped, was cooking. I hated shopping for it, but I needed that parmigiano.

Today, though, I can finally report a little progress. Albeit accidental.

It began last week, when I walked into the hardware store across the street from my bus stop. I needed to get a key copied. I was a little early for my bus. Why not? I thought.

There was a round woman behind the counter, leaning on it as if she could do so for her whole life. She had short grey fluffs of hair and arms with dimples at the elbows. Toward the back of the store an old man in suspenders sat in a lawn chair also looking like he could do it forever. By the door was another roundish woman about the same age as the first except that she’d clearly fought the grays; her hair was that rusty Clairol-brown, and I could see patches of scalp.

They’d been chatting, the two women; I knew I’d interrupted.

So I spoke quickly (and as usual — still — in English rather than French).

Did they cut keys?

The woman behind the counter almost nodded, but she motioned to see my key first. As I fumbled in my bag, the second woman made an announcement. She liked my skirt, she said.

I remember looking down at myself, and saying “Oh, thanks, I actually got it here.” (Which of course made no sense to anyone but me, since no one else could know that “here” meant Montreal, not Rome. But I said it anyway.)

When I mentioned the name of the downtown store where I’d bought the skirt the counter woman looked at her friend, “Dove è quello?”

In a heartbeat, before the friend could answer, before I could draw a breath, I asked, “Siete italiani?”

Even I can hear it — all the muted hope and anticipation of a child in a foreign country.

Someone who speaks my language…

I don’t normally do this.

There are many Italo-Canadian in Montreal. I meet a few every other day. And I hardly fall into their arms — even if, and when, they confirm that they actually speak Italian. I merely smile and nod. Maybe the smile is stronger, and maybe I talk with them longer, to see if there’s a connection.

But the hardware store moment was different.

No. This time I think it was because I was not expecting, not looking, hardly paying attention. The question, “Siete italiani?” — with all its tentative hope and emotion — came straight from the center of my stomach. Maybe the scene did it: three old people trading neighborhood gossip on a weekday afternoon, each culo so ensconced in its respective seat or stance; bodies that so clearly had been doing this for decades. I hadn’t realized it, but this was a place I had walked into a hundred times before.

And that’s the point; what I was coming to.

In the conversation that followed, after all the sweet small-talk (“ma non sei italiana… di dove sei… hai fatto il giro del mondo… ti trovi bene qua…”), they told me about the Italian grocery store down the street (“ma certo che c’è l’hanno le verdure buone…”), and the panetteria — with meats and cheeses and bread and sott’olii — located across from it.

Today, I found both. Today, I found Lavazza in the red-and-silver bricks and arborio rice (without having to hunt for it) and those delicious little stuffed peperoncini con tonno.

I found real pancetta and fresh focaccia (and even some frozen baccalà). On the walls of these places hung the requisite pictures of Christ and (of course), “GLI AZZURRI 2006!!!”

Both times, at checkout, I listened to the hum of the Italian around me.

One woman argued on the phone with a supplier (“Ma ti ho dato il resto — ti ho cambiato il pezzo di cinquanta…”) and another chatted with the milk-delivery-man (who wore a blue soccer shirt — of course). There was even a man in the back who mumbled to himself in dialect.

And I smiled quietly, too shy — still — to wave my hands in the air as I wanted to, and let my tongue loose from its shackles to say, yes, it’s lovely language, isn’t it?

About the Author: Andi Shiraz

Andi Shiraz is a Pakistani-born, Dubai-raised, former-and-always New Yorker, who — after living and working in Italy for over three years — has yet to master il congiuntivo. Her work has been published in the Canadian Writers' Journal, RAVESQ and Thinking Aloud. She's lives in Rome, where (apart from freelancing as a technology and content consultant for whoever will have her) she spends her time writing, making terrible puns, and trying to discipline an incorrigible cat.