To Have and To Have Not 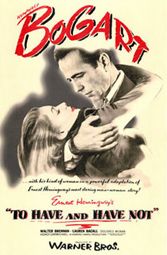 Tell your friends you want to bone up on Howard Hawkes or watch Bogart in his prime, but see this above all for Bogy and Bacall. Anything-for-a-price Harry Morgan (Bogart) lives in French-run Martinique where he and boozy buddy Eddie (the sanguine Walter Brennan) move cargo no questions asked. Suddenly, though, Harry must choose between the anti-Nazi Free French and his less savory local pals. Bogy would just as soon not deal with it (as always) but does (as always). Meantime, he and hot barfly Marie “Slim” Browning (Bacall in her debut) dish out screen sex. (Marie to Harry: “‘You know how to whistle, don’t you? Put your lips together and blow.”)

Forget the Hemingway story and just watch Bogart grin: he can’t not lust for this husky, towering dame. And she’s too nervous not to give it back in kind. Without bedroom nudity or gratuitous lewdness, the two knocked out the Hollywood power grid. They married within a year.