To Disney and back 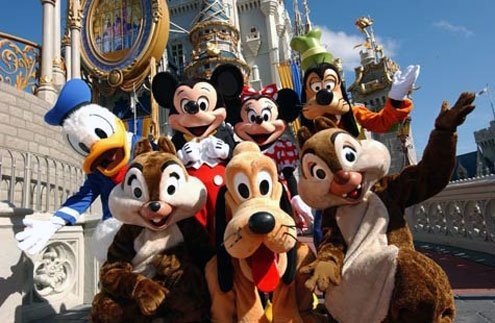 Donald and the $6 lollipop.
A

s soon as humans exit the womb they begin their quest for conquering milestones. Some are celebratory (first word, first step, first foie gras), others not so much (first stitches, first break up, first hangover).

As a parent I’ve reveled in writing down firsts in my boys baby books. But as an American I’d always dreaded one rite of passage: The Disney trip. Since I’m not a huge Disney fan I always thought I’d go when my kids were old enough to remember, thus earning Disney credits and never having to return to the happiest place on earth.

But grandma diverted my plan when she bought all her grandchildren a trip to the House that Mickey Built and, subsequently, a ride on his German-built boat (The Disney Dream Cruise). One week. All Disney, all the Disney time. I couldn’t say no. My mother wouldn’t let me.

The trip would be arduous. No direct flights from Rome would leave us with a door-to-door travel time of 23 hours, 17 minutes.

We pulled into the resort at 2 a.m. Eastern time with two comatose kids. My husband Marco carried a suitcase and Oedipus, our first-born. Besides my J Brand jeans, I wore my 19-month-old sleeping son in a sling, had a car seat strapped to my back, and was pushing the double stroller with two suitcases on it. (Note: I would make a great day laborer). When the bellmen put the ritual string of flowers around my neck I literally felt my knees buckle. I couldn’t take another ounce on my 100-pound frame.

We were then greeted with “Aloha’s” all around. Which was weird because we were not in Hawaii. We were in Orlando. In Florida. A red state.

We checked in and were invited to “Have a magical day.”

I didn’t know if it was an order or a nicety, but it made me uncomfortable. “You too,” I mumbled and grimaced.

After hearing the “magical day” salutation three times I’d start to itch. I wondered if this was an allergy to the happiest place on earth or just the pollen count.

Arriving a day before all the other descending Dugans (they flew from the north), we checked in hoping to hibernate for at least a day. Four hours later, the heirs to my future fortunes began to stir. Did they have some sick sixth sense about where we were? How could they know? Was there pixie dust saltpeter in the Disney water?

We got off the monorail and we were smack dab in front of the Magic Kingdom. And then it happened. My kids pointed towards the castle (they see it before every Pixar film), squealed with delight, and my wicked witch attitude went into Oz mode, as in: “I’m melting!”

We then celebrated all that Walt’s empire had to offer. We laughed (at Donald Duck), we cried (because it was nap time and we were burned out), we dipped our hands in our pockets (because like Jesus and the Catholic Church, Tom Cruise and Scientology, Mickey and the world of Disney loves cash). Seriously, I spent $6 on a lollipop at one point. Who’s the sucker there?

Cruising is something I normally delegate to gay men, but the Dream Ship was pretty cool. I especially liked the bathroom design and our lovely but locked veranda (someone kept trying to climb over like a character out of a Jonathan Franzen novel). And once I got past the fact that there were also some sick middle aged people on the boat (without children), we had oodles of fun.

Skepticism aside, spending a week watching my nieces, nephews and children enjoy pure and unadulterated fun made me realize my mother’s Disney plan (and cash) had created… magical days.