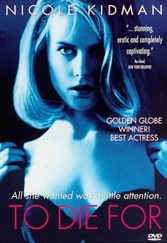 In recent years, the mature Nicole Kidman has emerged from her Cruising shadow to prove herself accomplished and dogged (“The Hours,” for example). Diligent in the extreme, almost ferocious, she’s recently been encouraged to put talent where beauty long resided. Few Hollywood women get the chance. This capricious bit of “early” Kidman, directed by Gus Van Sant (“Good Will Hunting,” “Elephant”) from a Joyce Maynard novel, is a black delight. Kidman is Suzanne Stone Maretto, a small-town news babe determined to make it the local TV business. But climbing the ladder has its liabilities, including encumbering husband Larry (Matt Dillon). Few actresses get the chance to skate so glibly between femme fatale and comic caricature. Kidman is the sincerely vacuous American pin-up with ambition and road rage enough for four. A breakthrough for young Joaquin Phoenix. Pitch-perfect.