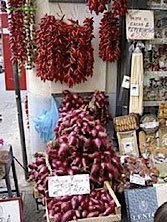 ast August, my family and I were lucky enough to spend some time on the Argentario, an enchanting mountainous peninsula located in Tuscany, just above the border with Lazio. Our host was Stefano, a childhood friend of my wife’s whose skills as a journalist and bon vivant are exceeded only by his talents in the kitchen.

August is a wonderful time of year to be eating in Italy, especially along the coast. Almost everything on the table is freshly picked, plucked, hooked or hung, from the figs and prosciutto on the lunch table, to the baked sea bass and baby potatoes at dinner. Fresh fruit, vegetables and seafood prevail; wines are chilled and gelato is more or less the order of every day.

So we were duly surprised to see our host return from the produce market in Orbetello brandishing nothing but a thick ponytail of red onions. Our surprise turned to trepidation when he gleefully announced his plans to spend the sweltering afternoon turning them into a “cipollata,” a pasta dish he’d learned the previous winter from a cook in Cortina.

Cortina? Visions of fontina and polenta trudged through my head; in my experience, even the finest mountain food is designed for steadfastly sticking to the ribs, and Stefano’s proposal sounded about as enticing as snorkeling with an anchor.

Our host begged our indulgence, and almost a year later I’m still thanking him for it. After roughly three hours in the kitchen he produced a pasta dish that was as succulent as it was simple: a sweet, vaguely tangy Tropea onion sauce made with nothing more than onions, cream, butter, olive oil, meat broth, parmigiano reggiano and a dash of fresh pepper. I can’t say it was light, but it was far more digestible than I’d feared.

The key, of course, was the onion. And not just any onion: Stefano insisted that nothing but the Tropea red would do. Tropea red onions are cultivated on the western coast of Calabria, where a particularly mild microclimate and limey soil fosters their growth and particular taste. The onions have a distinctive reddish-purple outer skin, with bright purple inner linings separating pale white sections. Generally oblong in shape, some larger specimens can fill out and take on the classic rounded shape associated with most onions.

Surprisingly sweet and easy to digest, the “cipolle rosse di Tropea” are believed to have originated in the mountainous areas of Turkey, Iran and India, and were first brought to Italy by the Phoenicians. Today they are part of the elite group of Italian foods currently under consideration for I.G.P. (Indicazione Geografica Protetta, or Protected Geographical Origin) status.

Like any self-respecting alimentary celebrity, the Tropea red has inspired claims of a host of beneficial properties: aiding digestion, toning cardiovascular systems, and acting as a diuretic. Pliny the Elder praised the onion’s medicinal properties in his “Natural History” (though it’s all but lost alongside the philosopher’s lopsided love of flax!), and a recent University of Buenos Aires study even managed to link the Tropea red to Viagra thanks to the bulb’s consistent levels of nitric oxide. Beware starry-eyed septuagenarians with onion breath…

But its greatest attribute is much more mundane: taste. A high sugar content makes the Tropea red sweet and aromatic, augmented by a faint piquancy, without which no onion can claim the name. This means it is often rendered into marmalades or balsamic vinegar-based jellies to accompany saltier foods like aged cheeses. Raw, the onion is perfect in salads, or chopped to top bruschetta, meats or other prepared dishes.

For the weepier among you, there are a host of tricks to cutting onions without too many tears. I’ve heard of everything from keeping a lit candle nearby to tucking a toothpick in your mouth to absorb the enzymes before they irritate your eyes. I’ve even seen “onion goggles” advertised, though I can’t see recommending them to anyone but cafeteria workers and the disastrously wealthy. In my experience, the most effective way to chop onions without weeping like Niobe is to put the bulb in the refrigerator for a while before cutting it, and to cut the root end (where the irritants are concentrated) last. Be sure to use your sharpest knife, since the fewer cells you slice the less lachrymose you’ll be.

Note: While Foodbox isn’t a cooking column and doesn’t present recipes per se, Stefano’s “cipollata” recipe is a worthwhile exception. Those interested in a copy of the recipe should write to Aaron Maines.