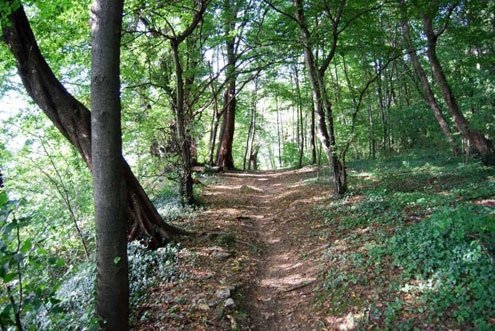 Chesnut trees along the Sentiero.
I

never tire of hiking Il Sentiero del Viandante. The 35-kilometer Wayfarer’s Trail runs from Abbadia Lariana to Colico on the east side of Lake Como. The trail is really a series of paths and variants, some with different names Via Ducale, Via Regia.

When it’s cloudy and cold, we hike the low roads, visiting castles and narrow-laned villages. We amble through terraced olive groves and stop at inns for lunch or tea. In good weather, we take higher, wooded paths to summer pastures. Snow-capped mountains rise over the lake far below.

Today we’re hiking a medium-difficult, high trail between the towns of Lierna and Varenna. It has the best view of Lake Como from il Piano di San Pietro at Ortanella (958-meters).

To start, my husband and I drive from Milan on the SP36 past the city of Lecco, exit at Abbadia/Mandello, and take the SP72 to Lierna (215-meters). The town once belonged to a medieval Benedictine monastery. Quaint houses crowd the fishermen’s quarter, Borgo Castello, on the water’s edge.

We park at the train station. We walk down the road, turn left in Via Genico and follow the footpath up to the stone houses of Borgo Genico. After this hamlet, we cross an asphalt road and follow orange signs, inscribed with “Sentiero del Viandante” and an outline of Lake Como, and number 71 signs for Ortanella. We walk under the SP36 overpass and take the trail on the right, marked with red-and-white striped Club Alpino Italiano (CAI) sign 71.

Immediately, we see a woman with a gerla, a traditional, cone-shaped wicker basket worn like a backpack. It was used to transport goods on mountain trails. It’s October, and chestnut season. Checking that we don’t follow and find her secret trove, she disappears.

For centuries, wayfarers, pilgrims and armies traveled these ancient mule trails. The Romans had constructed the Strada Regina, a road on the west side of the lake from the city of Como to Sorico and Chiavenna, but mountains hampered the east side’s development.

In Roman times, there was already a steady flow of goods. Lake Como extended to Samolaco (summus lacus) in Valchiavenna. It included Lago di Mezzola, now a separate lake, and part of the Chiavenna Plain, silted by the Mera River. By medieval and Renaissance times, copper, iron, brass, tin, hides, cattle and horses moved south while silk, wool, olive oil, wine, alum, spices and salt sailed north. The lake had a toll fee, as did Chiavenna, Il Passo and Bellagio. But goods transported on trails weren’t taxed. Fishermen plied the waters but regular boat service only began in the early 19th century.

We climb path 71 (71A is steeper and joins trail 71 farther up) through woods. Since 1992 local committees maintain the trails as a tourist service and we find a volunteer fixing a step. His rifle leans on a tree. Hunting season has just begun.

We ascend to Croce di Brentalone (650-meters) which overlooks its green valley. The lake and Lierna glimmer below. From here, the path is easier. At Alpe Mezzedo (871-meters), we rest on a rock fence admiring meadows, stone houses and a circular mound, a nevera, once used for food conservation.

After a three-hour, 750-meter climb, we reach small, San Pietro church and Piano di San Pietro (994-meters). From the lookout, our eyes sweep down the eastern, Lecco arm of the lake and across to the mountains of Triangolo Lariano. We gaze at Bellagio, at the tip of the triangular peninsula, where the two branches of the lake meet. Towns dot the western, “Como” side of the lake. Further down, the spur of Lenno hides Comasina Island. On the horizon, mountain valleys open to Lake Lugano and Switzerland.

Following “Viandante” signs, we walk through the park. In summer, it is full of picnicking families. They come in carloads from Esino Lario and Varenna. The Ristorante Albergo Cacciatori (tel. 0341.860.219) in Ortanella is a favorite spot.

We walk along the road to an unmarked path on the left. After 200 meters, an orange “Viandante” sign appears. The town in the valley on the right is Esino Lario.

In the 1600s, Spanish rulers built a road behind littoral mountains and connected populated, internal valleys with lakeside towns. However, it wasn’t until 1832, under Austrian rule, that engineers finally completed a carriage-wide tract along Lake Como to link Vienna to the second city of its empire, Milan.

A pheasant rockets out of dried shrubs with a whirring of wings. I wish her good luck. Distant gunshots ring out. Is it the volunteer step-fixer? In Italy, hunting clubs raise game birds and release them into the woods.

Surrounded by glistening water, Varenna’s promontory appears below. We descend on steep switchbacks towards Vezio (383-meters), a rustic village of tall, stone houses. Its castle belonged to Teodolinda, Longobard Queen of Italy, who died in Monza in 627 AD.

From Vezio, we arrive quickly in Varenna. British visitors love its microclimate, water sports, famous gardens of Villa Cipressi and centuries-old villas, such as Villa Monastero, set on Roman street grids. Of Gallic-Roman origins, Varenna’s real story began in 1169 when exiles from Comacina Island, fleeing the ire of Como, occupied this fishing village.

The Comaschi took revenge on the islanders either for their alliance with Milan in the total destruction of Como 40 years before or for their adherence to Aquileian Patriarchate rites versus Como’s Ambrosian rituals. Both were Catholic, but at the time religious preferences were matters of life and death. A June 24th weekend festival of fireworks and floating lights on the lake commemorates the event.

We board the train and buy tickets from the conductor. A five-hour hike ends with an eight-minute ride back to Lierna.

— See photos of the trail taken by local environmentalists, concerned that parts of the lake coast may face suburban development.