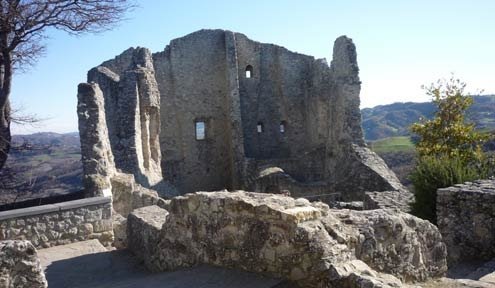 View from Canossa. Photos by Andrea Smith.
A

ndare a Canossa, or going to Canossa, means to repent in humble supplication. It originated in 1077 when Holy Roman Emperor Henry IV (1050-1105) did three days of penance outside the castle of his cousin, Grancontessa Matilde di Canossa, to implore Pope Gregory VII, who had taken refuge in the castle, to revoke his excommunication. It was a tactic to weaken the pope’s position in the Investiture Controversy (1075-1122), which while seeming to be about control over the appointment of church officials was in fact a war of wills between religious and secular powers in medieval Europe.

Today my husband, Marino, and I are going to Canossa but our only repentance may come from eating too much. But first we’ll hike to work up an appetite.

It’s a bright November morning when we leave the agriturismo farmhouse outside Carpineti in the Apennine Mountains in Emilia. Deer range in a distant field. We drive to Felina and highway 63 to Casina, then left to Sarzano where we pass one of Matilde’s castles. At Stella we go left to Canossa (530 meters).

Outside the castle walls, we park at La Rupe. I remembered the delectable, traditional Emilian cuisine served by the elderly cook and her son who waited tables. Twelve years later, we find a new generation of family chefs while the son still manages the dining room. We make reservations.

As we set out, chilly winds from an exposed ridge discourage us from taking the path, located to our right, which leads to Rossena castle, another of Matilde’s fortresses and visible from Canossa. Since this loop trail takes three hours, we instead opt to cross the road, taking the marked path to Votigno (433 meters) and La Casa del Tibet.

The trail crisscrosses a quiet road and sparse deciduous woods. After 40 minutes, a stone Buddha marks the laneway to the restored hamlet. Founded in 1990, this cultural and meditation center also offers assistance to visiting Tibetans. The museum displays religious antiquities and everyday objects as well as photographs taken by writer Fosco Maraini during journeys to Tibet in 1937 and 1948. One section is dedicated to Gandhi.

I’m intrigued by the changes in Votigno since we last hiked here on a ring walk from Pecorile to Canossa in 1997. An array of Buddhas, devas (images of god spirits) and angels, stupas (reliquary heaps), religious carvings and secular decorations make a colorful atmosphere. The resident painter, Tashi Tseing Lama, has completes a lavish styling of the Buddhist temple room. A photo of the Dalai Lama adorns the altar. Next door, the simple church of Saint Francis of Assisi is unchanged.

Afterwards, we walk back along same path back exerting just enough uphill exercise to earn our lunch. At Canossa, we have time to visit the castle ruins and national museum beforehand. From atop the rocky fortress, we scout the Padana plain, the Alps and the Apennines of Parma and Reggio Emilia.

The Countess Matilde might have stood here watching for the Byzantine advances to the east or Henry picking at her prize territory from the north. Although women could not own property and the widowed Matilde had given her land titles to the Church, she still controlled an army that defended popes and had defeated Henry on more than one occasion.

After three decades of bickering, she was left with little more than her mountain castles. Yet Henry was still unable to dominate the Italian peninsula or unite Europe. Their struggle set the stage for the rise of Italian city states while the Church would regain its powers and later send restless European nobles to the Crusades. Pity there were no Dalai Lamas at the time!

At La Rupe bottles of local San Giovese wine sit open on tables while families and friends chatter in the sunlit room. Nothing has changed. Smooth handmade tortellini in broth with local parmesan cheese warm me up. My husband eats tagliatelli ai funghi porcini. We both have roast rabbit and pheasant — crispy outside and tenderly succulent within. This is traditional Emilian cooking at its very best, as good as Marino’s mother’s and her mother’s…

After lunch, we drive down to the Diocese-owned Rossena castle (491 meters) and its nearby sentinel tower called Rossenella. The fortress sits on reddish volcanic basaltic rock and hence its name derived from rosso. In the distance we look up at Canossa on its crumbling white crag.

Both castles perch on mini volcanoes erupted under the sea 100 million years ago. As the mass of magma cooled in the water, it formed “pillows” of lava with sliding masses of clay from the rise of the Apennines.

From Rossena castle, we follow the road to Ciano d’Enza and take the SS513 to San Polo and the A1 highway at the new entrance announcing “Terra di Canossa” between Parma and Reggio Emilia. This portal to Matilda’s territory on the A1 is a fitting recognition to her legacy. Matilda, Queen Christina of Sweden and Maria Clementina Sobieska are the only three women buried in St. Peter’s Basilica in Rome.