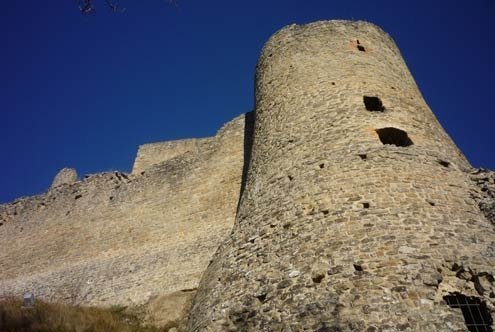 rom her castles in the foothills of the Apennine Mountains in Emilia, the Lombard Grancontessa Matilde di Canossa (1046-1115) defended popes, fought emperors and brokered peace. She ruled her feudal lands north of the Papal States from Lazio to Lake Garda and controlled the western route from north Europe to Rome. The saying “andare a Canossa,” meaning to beg forgiveness and eat humble pie, has its historical roots in the legacy of this powerful woman.

This November weekend my husband and I are hiking to her castles in Carpineti and Canossa. The drive takes about two-and-half hours on the A1 from Milan to Reggio Emilia, then highway 63 to Felina where we follow signs to Carpineti and Le Scuderie, an agriturismo mentioned in the Michelin Guide and by Slow Food. We arrive just before lunch. Daniele, the owner, shows us to our simple farmhouse room with bath while his sister and business partner, Eugenia, prepares in the kitchen.

What a lunch! Traditional Emilian food in her deft hands is lighter than it sounds. To nurture body and spirit we get green tortelli stuffed with potato and smothered in pancetta and lard sauce, papardelle with boar meat sauce, followed by porchetta ai ferri con balsamico and mixed grilled meats.

Fortified against the blustery wind, we set out on the Sentiero Matilde trail which runs from the town of Ciano d’Enza to San Pellegrino in Alpe and the Garfagnana area in Tuscany. It’s marked with the red-white-red horizontal Club Alpino Italiano stripes and the “SM” abbreviation.

We hike 10 meters down the path when a glossy cock pheasant rockets upward with a harsh squawk. It disappears into the wood that separates the trail from open fields. We walk to San Donnino Riano where we follow the asphalted road. We find shortcuts of steps leading to footpaths at bends in the road and quickly arrive in the town of Carpineti. The name derives from carpinus betulus, Latin for hornbeam, which grows here. It’s a small hardwood tree with catkin flowers whose fruit provide an herbal remedy for “Monday morning syndrome.”

In Carpineti signs lead the way up Via Primo Maggio. We turn left on Via Crispi to Piazza Matilde di Canossa. We stop to photograph this quaint, medieval square. It’s the first indication we see that for four decades during the 11th century, Carpineti was an important center of the Christian world.

We continue along Via Crispi to a church; a trail beside it leads to the castle. It’s an easy climb of about 350 meters through wooded park. In about an hour we reach the crest of Fosola-Valestra (800 meters). The castle looms above like a Scottish fortress. We don hats against the windy blast and gaze at the green Secchia and Tresinaro valleys and rivers. The position looks south towards Matilde’s ancestral home of Lucca. The snowy triangular peak of Monte Cimone in the distance signals the border of Tuscany.

The year 1076 was quite eventful in Matilda’s tumultuous life. Both her mother and her husband died. Her ally, Pope Gregory VII, excommunicated her second cousin, the German Holy Roman Emperor, Henry IV (aka Heinrich IV) over the Investiture Controversy. In 1077 the pope retreated to Carpineti castle under the countess’ protection to protect himself from impetuous Henry, who had traveled to Italy to get his excommunication revoked. With Matilde acting as an intermediary, Henry waited in barefoot penance outside her Canossa castle for three days in January snow before the pope would see him — or so the story goes. The rivals reconciled but the astute Henry wasted no time in renewing his fight with Gregory.

In 1092 Matilde hosted the “Convegno di Carpineti” in the castle. Abbots, bishops, nobles and councilors met to discuss the ongoing conflict between the papacy and Henry IV. Henry’s son, the Holy Roman Emperor Henry V, proclaimed Matilde queen of Italy in 1111 to reward her for her support against his father. She died in 1115. Two years later, Henry V moved into the castle with his wife, another Matilde and daughter of Henry I of England. The castle then passed through many families until it was purchased by the province of Reggio Emilia in 1978 and restored as a museum.

Inside the castle, our guide describes life during Matilde’s reign. We admire costumes of velvet with gold trim, woolens for winter and linen and hemp clothing for summer. A medieval toilet in an alcove of the tower hangs over empty space outside. Perhaps Matilde built it remembering that her first husband, the hunchback Godfrey IV, Duke of Lorraine, had been murdered before battle in 1076 as he went outside when nature called. From the top of the tower we survey the foothills and plain in the provinces of Reggio Emilia and Modena.

We walk back the same route. We approach the agriturismo in the dark. Eugenia’s zuppa dell’agricolo, farmhouse vegetable and cereal soup, warms my chilled bones. I stay with the comfort food motif and have apple cake while Marino eats culatello di Canossa, prosciutto ham from the tastiest soft behind, and zuppa inglese, the rich Italian rendition of English trifle. Tomorrow we’re off to Canossa.

— Where to stay, see Agriturismo Le Scuderie. For information on the historical aspects of the trek, see Castelli reggiani, Matilda of Tuscany and Matilda di Canossa.