“To be impossibly blatant…” 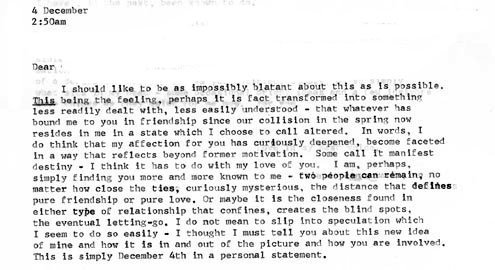 This is simply December 4th in a personal statement.
F

alling in love has been abbreviated of late. Partly responsible is the allure of the instant. As is the quirky, distracting terseness modern communications has transformed into an jargon of sorts. Where once love letters took weeks if not months to conceive of, write, send and arrive, an aching and painstaking process that required determination and follow-through, quicker connection methods make such olden waits seem like a waste of precious time, if not the epitome of a bygone caution. Add to that the traffic images, which along with so-called emotions can display mood and method without the wordy foreplay.

Yet that foreplay, often elliptical, had a preciously languorous dimension made all the more compelling because the contents of a letter, once sent, could not be instantly disavowed. Its intellect and texture possessed a total focus that left a mark. Relationships often took longer to evolve and leaned almost entirely on words and their transformative, between-the-lines power, which often began with a kind of letter of intent.

This 1964 letter from a woman to a man was sent after the two had been friends and college classmates for more than three years, all the while maintaining a daily but non-intimate relationship. It was the first of many missives that would soon turn into professions of love on both sides, though at the time of this letter’s sending the principal actors were thousands of miles apart and were still only friends.

They would ultimately become lovers and remain together for nearly a decade, with the woman eventually becoming a successful writer and the man pursuing various business enterprises in the United States and abroad (their names have been omitted to protect their privacy).

But the first part of their blossoming relationship was conducted entirely by mail, both handwritten and typed, with months of exchanges before this initial and tentative romantic “breakthrough.”

In passing, the two were photographed kissing by a mutual friend several years later, a now water-soiled image that these days would very likely have made quicker rounds — at least among online friends — than the half-century it has taken to publish it.

I should like to be as impossibly blatant about this as is possible. This being the feeling, perhaps it is transformed into something less readily dealt with, less easily understood — that whatever has bound me to you in friendship since our collision in the spring now resides in me in a state which I choose to call altered. In words, I do think that my affection for you has curiously deepened, become faceted in a way that reflects beyond former motivation. Some call it manifest destiny — I think it has to do with my love of you. I am, perhaps, simply finding you more and more known to me — two people can remain, no matter how close the ties, curiously mysterious, the distance that defines pure friendship or pure love. Or maybe it is the closeness found in either type of relationship that confines, creates the blind spots, the eventual letting-go. I do not mean to slip into speculation which I seem to do so easily — I thought I must tell you about this new idea of mine and how it is in and out of the picture and how you are involved. This is simply December 4th in a personal statement.