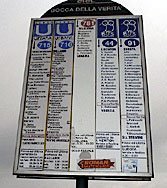 I catch a bus that takes 50 minutes (when it doesn’t break down) to get into the city center.
R

ome and I have a love-hate relationship. When I’m fighting with Rome, my boyfriend Fabio gets defensive. “If you hate Rome so much, then why don’t you just go back to Miami?” he’ll scream. I know he doesn’t mean it. He’s just scared I’ll leave. I’m not going anywhere.

After nearly four years here, I feel at home. It’s not that I don’t love Rome. I do. I’m just over the touristy stage. Once you get past monuments and ruins, warts come out. Rome’s got some major T.N.A. Traffic, noise and angry people. This pops up if you live outside the centro storico. Since I don’t reside above the Trevi Fountain or a stone’s throw away from the Colosseum, I get a lot of T.N.A. every day.

On my daily work commute, I catch a bus that takes 50 minutes (when it doesn’t break down) to get into the city center. For most people, that kind of time would be the major headache. My problem is getting a seat. I kid you not.

As the bus approaches I feel like I’m at the starting line of a race. I scope out my competitors (mostly senior citizens) and ensure I’ve strategically put myself up against someone slower to win the seat race. Oh yes, and you also have to find a seat that, 1. Isn’t too close to the driver; 2. Isn’t reserved for the elderly, and; 3. Isn’t located near the middle door. Those areas are teasers because a senior citizen is bound to boot you.

This all sounds strange to Fabio. Then again, he’s only used Rome’s public transportation a handful of times. “It can’t be that bad,” he says. “I’m sure Miami buses aren’t any better.”

True, Miami buses are no better. But at least you can sit down. Trust me, a seat can make or break your day. People who board two stops after me are unhappy. I’d be too if I were sardined between 100 people and had my face stuck under someone’s armpit for the entire ride.

Then, there are the are riders themselves. Very few normal people ride the bus. Many suffer from big-time bus rage. There’s just no personal space. On a packed bus, the chances of being trapped by a pickpocket or a pervert are very high. A few weeks ago I met both. Luckily, neither one involved me directly.

On my way to work I heard a guy scream, “Aaaoohhh! Stop this bus right now. Attempted theft! Someone’s trying to pick-pocket me!” He was only a few rows away.

The driver let him off while the pickpocket stayed on. No one said a word. Instead, everyone went about his or her own business.

Heading home the next day, I felt the unwanted presence of someone behind me. I immediately thought, “Pickpocket!” (Fabio says I’m paranoid. I’d agree if I hadn’t actually stopped three pickpockets from robbing a little old man. Ever since, he’s taken to calling me his poliziotta.)

But back to the guy behind me.

As he started breathing down my neck I shifted away as much as I could, maybe a couple of feet. I then glanced over my shoulder to see what he was up. Well, let’s just say that smelling one girl’s hair — she was beside me — was making him very excited.

“Next time, just move away. And maybe just don’t wash your hair as much.”