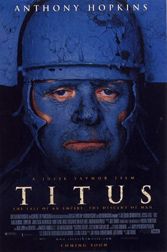 Anthony Hopkins (Titus, back from war) and the wildly shrill Jessica Lange (Tamora, the defeated Goth queen) are in turn appropriately brutish and snakelike, with Hopkins’ preening and sense of “stricken-ness” gobbling up acres of landscape. His Titus is a Mussolini-Hitler who can’t keep order among his own brood, putting his legacy at risk from the inside. The vicissitudes of succession lead the story toward domino-effect tragedy.

Taymor spares no occasion to drive home the extent of the spiritual and carnal violence. This is Shakespeare’s Sherman’s March of plays, a scorched earth story in which no one is expected to get out alive, lest tragedy miss its mark. Taymor has preternatural sense of how to match set to mood and character intentions, and her EUR landscape takes on a life of its own. But her decision to let the film drift toward three hours proves unwise. It becomes an exercise in, “Can you top this?”, with Titus-Hopkins eventually running out of gas. The film has much in common with Ian McKellan’s “Richard III,” another forward-recasting of Shakespeare in Fascist guise.