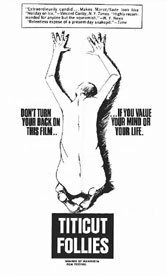 Minutes into director Frederick Wiseman’s 1967 documentary about the unethical treatment of patients at Bridgewater State Hospital for the criminally insane, the camera closes in on a patient staring out his cell window. The window is small and iron-barred; the patient is naked; the room is bare. There is no furniture — not even a bed.

It’s a tearful scene. Not because of its simplicity, which is grim, but because Wiseman has captured the melancholy of the powerless. French philosopher Michel Foucault wrote only six years before the film’s release that insane asylums were never devised to help the insane. He claimed they were created instead to promote a positive public image of psychiatry — a force that could eliminate madness and social deviancy from society. But “Titicut Follies” (named after a talent show put on by the inmates) exposes psychiatry’s centuries-long gimmick, even without documentary’s traditional narration or voiceover. The brutality speaks for itself.

A patient asks his psychiatrist why he’s been diagnosed with paranoid schizophrenia. “Because we did the psychological testing,” the doctor mumbles, walking away. The inquisitive patient is a loud, outspoken debater, making more than one appearance in the film. Why, he asks, has he been kept at Bridgewater for years when the treatment has only worsened his condition? His questions are always more straightforward than the responses he gets.

But most of the patients are heartbreakingly silent, shut up by a merciless staff that forcibly inserts tubes into the patients’ nostrils when they refuse to eat. It’s aggressive power versus the civil disobedience of a hunger strike. The psychotic patients, rebelling in quiet, are more civilized than their “sane” handlers.

An embarrassed state of Massachusetts was infuriated by the documentary. The film was banned for more than two decades on the unconvincing basis of protecting patient confidentiality. Screened once on PBS in the 1990s (bootleg VHS tapes circulated thereafter), it was then released to DVD by Wiseman’s production company Zipporah Films. Bridgewater State Hospital remains open. But Wiseman’s diligent probing permanently damaged the asylum’s reputation and made it the subject of numerous legal investigations.