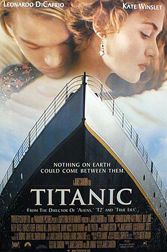 Thank God for leaky ships. James Cameron’s Titanic disaster is the mother of all digital ambition, a technological opus tantamount to landing a movie on the moon. His three-hour dreamboat earned 12 Oscars and produced a cash orgasm that’s still quivering. While the boys-and-their-toys part is a sight to behold, the story line is pedestrian. Leonardo DiCaprio is Jack Dawson, and Irish waif-cum-artist (a cool looking James Joyce-type), who boards the ill-fated White Star Line vessel on a lark and pursues an inappropriate courtship of Rose (Kate Winselt), who’s freshly married to landed brat Cal Hockley (Billy Zane).

Romance and reminiscence allow Cameron to pet the period’s class distinctions while taking you on a guided tour of his gussied-up fake-o-liner. The film takes off when the ice gets going, which is also when Cameron remembers he’s making an epic and encourages his cameras (and computers) to sweep the scene majestically. The liner’s death throes are visually incomparable, though with few exceptions (bodies floating after the sinking) it’s hard to believe real humans are involved. No matter. It’s good show-business — grossing about $2 billion since its release, the most in film history.