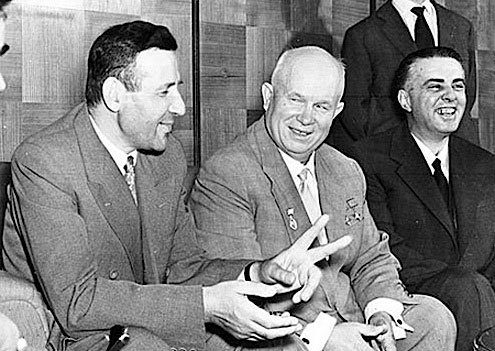 Enver Hoxha (far right, smiling), tyrant of tyrants for five decades, was if nothing if not Albanian. The writer Ismail Kadare and others call him only “The Leader."
<

See that parked 1960s Mercedes, the one with those gorgeously passé curves that just dropped off the Chinese deputy prime minister? I do. “That Mercedes,” says the bellhop, “was probably one of Hoxha’s cars.”

It’s the second such car-briefing I’ve received in an hour.

The Chinese official is in town to meet the prime minister, Sali Berisha — “a megalomaniac but a good Albanian,” the editor, my gifted host, explains over lunch. We are in the roof garden restaurant in the Tirana Twin Towers. The towers were finished a year ago after construction was briefly halted because Al Qaeda cash, funneled through unbrotherly bin-Laden fronts, was said to be involved in their construction. The 25-story buildings exude shopping mall gloss without shops. There are moments Tirana feels like Brasilia in reverse, zoning hung over or not yet invented. Anything is everywhere.

The phone rings. The editor wags a finger. It is the country’s chief prosecutor.

“Berisha hates him,” the editor says afterwards, “he wants to have the power to wiretap but the prosecutor won’t let him.” The papers says Berisha is drumming up a probe to get him fired.

According to the editor, a self-styled patriot, chess wizard (he once beat Victor Korchnoi), and part-time quantum physicist once exiled to Germany, Albania is a zany place with an overactive imagination. So is the editor, but with literate brilliance to spare.

Berisha, he says, is a total lunatic.

Why? I ask, playing (and being) the neophyte.

The editor lights up another Rothman slim light and drags on it profusely.

I should know, he says, that lately Berisha (a well-connected pro) went to Russia trying to sell Moscow on a natural gas pipeline flowing south from the Ukraine through parts of the former Yugoslavia, then veering west through Albania and across the Adriatic to feed south Italy.

“The only problem is that any real pipeline needs to go from Algeria north, through Italy, and into Austria, and the other way — simple north, south, no? Why send it through Albania to then cross the sea? Absurd!”

Yes, he says, such concoctions make Berisha crazy. Oh, and by the way, they are good, combative friends.

When we get to his illegally positioned SUV we find a pink slip — a 1,000 Lek parking ticket. “Eight euro,” chortles the editor. “The police are getting good.”

If you descend from the south, Tirana appears as a hoofprint of drab roofs in a cleft of smoggy mist. Before the cleft are dozens of daunting, sandy hills that look like Martian knuckles with five o’clock shadows and no fashion sense. The 10 kilometers of gouged road from airport to city are on loan from a drunken bomb squad.

American Embassy officials, American and Albanian, moderate the medieval: they are gracious and chipper and dodge the cranky nationalism the editor harps on in tribute to his trade.

Much of Albania is under 30, says an embassy aide. It shows. Mobile-toting, jeans-clad teenagers clutter the boulevards by the thousands. The country is becoming more devout — about 70 percent of its 3.5 million inhabitants are Muslim. A secular future is probable but not sure.

A diaspora is another concern Four Fulbright scholars to the United States all returned home (though admittedly compelled to do so for at least two years.) If I think there’s a brain drain, says the aide, I should think again. Albania, though still ragged, is an “emerging” democracy many people actually want to work.

America, says the editor, is the country Albania should be with. It’s a good deal. They invest in you, they protect you, they’re good for us. Is he pro-American? On the contrary, he has no love for George W. Bush, nation building, or even shopping malls. The United States is an amateur show. “America is a state, not a nation. This is a nation. It takes 1,000 years to make a nation. I love my nation.”

Cartesian in precision, Balkan in sweep, his beery enthusiasm honors that endearment.

What about Italy? I ask. After all, they were briefly Albania’s lord and master, erecting chalky Fascist plazas that look like EUR.

“Italy I don’t understand,” he answers. “Their policy has been laissez faire. They let the Greeks take over. That’s what’s happening here. The Greeks have moved in. They lost their chance.”

Balkin geopolitics are eternally argumentative. Tiny Albania is bordered by Serbia, Montenegro, Macedonia, and Greece, with the Adriatic on the west. Until two decades ago it held Moscow and Beijing and Washington in alike contempt. But xenophobia, when it wanes, can ironically bolster self-esteem. Enver Hoxha, tyrant of tyrants for five decades, was if nothing if not Albanian. In fiction, the writer Ismail Kadare and others call him only “The Leader,” as if awarding him full power over an overpowering yesterday. He ruled brutally; he loved undoing what little bureaucracy he made around him. He left behind a potholed city, pockets of political self-importance, and a few Mercedes for latter-day Chinese to use on a rainy day.

A caution at this juncture: don’t hold my chronicles too close to the light. I’m still too freshly removed from Roman sun into Tirana’s intermittent rain squalls.

The editor drives me through the hectic center, citizens as passengers in a chaos they make no effort to influence. The mayor, Edi Rama, a basketball-tall artist, decided to dab the façades of center’s residential building in primary colors. One embassy official’s child is enchanted. It’s hard to know what the citizenry thinks.

“Rama,” says the editor, “he’s brilliant. He’s built streets, changed everything. Sometimes he looks at the buildings” — he points to cracked brick-front — “and he says to me, ‘Look what I was given to work with! The colors were all I could do.’”

“Like Peter the Great,” he answers. “He uses force to get things done. Old school.”

What no one understands, he adds, is the depth of Albania’s Ottoman sensibilities. “We do things slowly, corruptly, the Turkish way,” he winks.

Tirana at first wink is an elementary school as a 10-year-old might arrange it: disheveled, dirty, with sneakers and detritus and posters and dilapidated mementoes from a long lost rafting trip strewn in the hallways. It’s a capital as undergarment, in the best and worst sense. Worst because an undergarment shouldn’t be worn for half-a-century; best because its diesel-driven aromas and noise levels hint at energies ahead, a purpose, a destination. Otherwise the wear and tear would rest inert. It doesn’t.

The editor drains his third beer. “Russia,” he says confidently, “they’ve won this round. America with Iraq. Waste of time. Meantime the Russians have been assembling the energy sources. The have their hands on the gas faucets. That’s why Berisha is crazy to talk about pipelines with them. It looks like he’s conspiring with Russia and Germany against America. He’s crazy.”

But better than nightclubbing Socialists.

That’s not to minimize paradox: Here is Berisha, who apparently deplores the endemic corruption, trying to kick out a clean prosecutor so he can wiretap.

The editor lights up yet again. He reiterates his national pride. Here, at least, you live to the fullest. He reminds me of something James Salter once wrote: imagine the “the profound joy of being beyond all codes, of being completely independent. Criminal is the word.”

“Listen,” the editor whispers, abridging his rhetoric to serve the sentimental, “I criticize Berisha; I’m hard and I’m tough, but if I ever called him and said, ‘I need you. I have a problem.’ He would be in this hotel lobby in five minutes. No question.”

I believe him. Perceived viscerally, Tirana promotes overlapping interests, a haphazard book club numbering politicians, writers, and gangsters. Confluence and conflict are constant, so is contact.

People know people. Criminal is the word, but happily so.

Oh, the editor says, and one more thing:

“Did you see that Mercedes in front of your hotel? Well, I think that car probably belonged…”