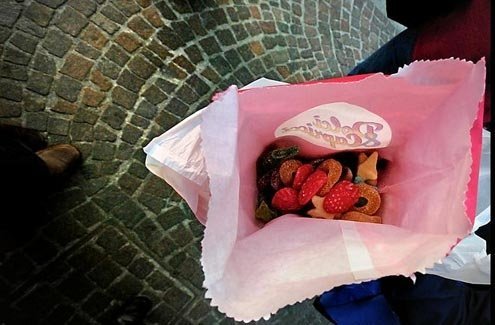 Whether from shop or restaurant, Italian sweets run riot.
I

talian desserts are a colorfully named bunch. Starting with most well known, tiramisu — “pick me up” — that rich pudding or cake that incorporates layers of creamy mascarpone, eggs, and ladyfingers dipped in coffee. Hollywood gave it a life of its own in the 1993 movie “Sleepless in Seattle”: wary widower Sam Baldwin (Tom Hanks) learns about it throught his cagey friend Jay.

Sam: “What is tiramisu?”

Sam: “Some woman is gonna want me to do it to her and I’m not gonna know what it is!”

After that exchange, tiramisu made its way onto countless international restaurant menus.

But it’s just the tip of the iceberg. Many Italian desserts sound delicious, but few know all of them by name. So, here’s a handy guide to some of the more common Italian meal-ending treats, with a few tips on where to find them at their best in Rome.

Panna cotta, the silky, snow-white northern Italian dessert, is just what the Italian says: “cooked cream,” with gelatin added and set into a mold. It’s served chilled and usually drizzled with some kind of warm coulis or sweet sauce (wild mixed berries, caramel or melted dark chocolate). Pastry shops that stock artisan gelato and have ample refrigeration, usually make panna cotta at some point in the winter. That version should be enjoyed fresh from the fridge.

Crostata is a traditional home-baked open-top tart. It has a shortbread shell slathered with fruit marmalade, a crisscrossing pastry lattice decoration, and is briefly oven baked. Though found on some restaurant menus, it’s a quintessential merenda (afternoon snack) cake that’s most often family baked or bought in artisan pasticcerie or posh delis such as Gargani (Viale Parioli, 36/B. Tel. +39.06.807.8264).

Ciambellone is another mid-afternoon snack classic, a rich, dense, yellow cake (along the lines of American pound cake) traditionally made with 14 eggs for each half-kilo of flour, butter and sugar. Over the years bakers have tweaked the original cholesterol-fest formula, cutting down on eggs and adding baking powder. The ring-shaped ciambellone derives from ciambella, Italian for “life preserver.” Be aware some Rome cafes sell an industrially baked and pre-sliced branded ciambellone, which is a distant relative of the homemade original.

Zuppa Inglese is a custard pudding that despite its name is neither English nor a soup. No one knows the exact origin of the name. Some say the English trifle was an inspiration, while others insist it’s absolutely Italian. “English soup” is made by spreading custard over a base, usually layers of sunny yellow ladyfingers moistened with Alchermes (a bright pink Italian vanilla-flavored liqueur infused with spices and rose water). A good zuppa inglese spot is the Marinari pastry shop (Corso Trieste, 95. Tel. +39.06.854.3257; not to be confused with its nearby Piazza Santa Emerenziana competitor).

Millefoglie is Italian for the classic French mille-feuille, a layer cake whose flaky puff pastry skeleton is covered with feather light chantilly crème strewn with wild strawberries or dark chocolate chips, depending on the season. It’s messy to cook, let alone eat, and though a common restaurant item, you’ll find Rome’s best at family-run Pasticceria Cavaletti (Via Nemorense, 179-181. Tel. +39.06.8632.4814).

Crème caramel isn’t usually homemade or even found in a pastry shop. Instead, the caramel custard is a widespread restaurant item. Crème caramel differs from crème brûlée in that the top layer is soft caramel and not the “burnt” hard caramel topping of the French pudding. A rich sugar syrup cooked to liquid caramel is poured into the mold before adding the custard base, and then cooked en bain marie.

Torta della Nonna (whose grandma, or nonna, remains a mystery) is a popular pie made from a pastry dough base and with a custard filling. The top of the pie is littered with toasted pine nuts and dusted with confectioner’s sugar. The flavor combination of the sweet and supple cream is balanced by the crunch and slight bitterness of the pinoli. Bar Pasticceria Romoli (Viale Eritrea, 140/144. Tel. +39.06.8632.5077) is known for two things: Midnight cornetti and excellent torta della nonna.

Mont Blanc is a wildly rich and opulent chestnut, meringue and whipped cream cake — a mountain of calories — shaped like the Franco-Italian Alpine massif after which it’s named. Rome’s best Mont Blanc outlet was once Marinari. No longer. It’s been dethroned by Ponte Milvio’s Bar Pasticceria Mondi (Via Flaminia Vecchia, 468. Tel. +39.06. 333.6466). A definite must.

Profiterole — talk about rich — is a basically a pyramid of choux pastry balls filled with whipped cream or pastry cream covered with a dark chocolate sauce and garnished with whipped cream before being refrigerated. Two places battle for the profiterole gold: Pasticceria Regoli (Via dello Statuto, 60. Tel. +39.06.487.2812) and the “other” Marinari (Piazza Santa Emerenziana, 20. Tel. +39.06.8621.9332). You be the judge.

Traditional holiday desserts include Christmas Panettone, a rich loaf of sweet bread made with eggs, lots of butter, whose golden dough is studded with raisins and candied fruit. For the less adventurous, Pandoro is in the same vein, without fruit added. Artisan bakeries and pastry shops stock them, but avoid the supermarket cheap stuff.

Pastiera, an Easter tradition in south Italy, is calorie-rich tart made from wheat grains, mild ricotta cheese, eggs, orange-fragranced water, citron and a mix of spices.

As for regional specialties, Tuscany has Castagnaccio, a delicious non-sweet dessert that’s made with chestnut flour and olive oil, decorated with pine nuts, raisins and rosemary needles, before being popped into the oven for a quick bake.

Sardinia offers Seadas, pockets of fried dough with a sharp pecorino cheese filling served warm and dribbled with bitter honey from the evergreen strawberry tree (corbezzolo. I enjoy mine at a restaurant called Grazie Deledda (Via Sacco Pastore, 14. Tel. +39.06.06.860.4333).

Piemonte brings us Bonet (or Bunet, depending on what part of Langhe wine country you’re in), a flan added with dark chocolate, caramel and crushed amaretto biscuits. The fun Monti hangout Fafiuché (Via Madonna dei Monti, 28. Tel. +39.06.699.0968) does a great job with this dessert. It helps that one of the owners is Piedmontese.

Sicily gave us gelato, granita and most of Italy’s best desserts. There’s also cassata, round sponge cake layers moistened with rum and layered — get ready for this — with a ricotta, chocolate and vanilla filling cream. After which comes the candied citrus rind, the pink marzipan shell and the green pastel colored icing. The cassata is topped with candied citron wedges. Calories? Don’t ask.

Another Sicilian emissary is beloved cannoli, tube-shaped shells of fried pastry dough filled with a sweet creamy mix of mild ricotta and a combination of vanilla extract, chocolate shavings, pistachio nuts, Marsala wine, rosewater and candied citrus peel. Cannoli range in size from mignon, no bigger than a finger, to the 10-cm version typical all over Sicily (and the rest of the world). Native to Palermo, cannoli were once prepared for Carnival season, as a fertility symbol, as their naughty shape implies. In Rome, cannoli and cassata are available at the Sicilian pastry chain called Dolci di Nonna Vincenza, whose Rome branches are located in the city center and a few local malls, as well as in several Italian airports.

Torta Caprese is a chocolate and almond pie, whose name refers to its Capri birthplace, where its complex, double dough recipe was invented. The thick, rich texture is often offset by a generous orb of à la mode vanilla gelato. Sfogliatelle are stuffed pastries shaped like seashells or cones. Sfogliatelle means “ruffled leaves,” and the texture does resemble stacked leaves (imagine a vintage Issey Miyake gown). The jellyroll-like folds and overlapping layers open into an orange blossom-flavored ricotta filling. The baked result is a crispy, buttery layered outside and a soft sexy interior.

When ordering sfogliatella in Naples you may be asked to specify if you want a sfogliatella riccia (meaning “curly”) or sfogliatella frolla, where a cinnamon short-crust pastry pocket substitutes the characteristic ruffles. In Rome, Pasticceria Saggese, near Piazza Bologna (Via Michele Di Lando, 13. Tel. +39. 06.4423.7950), is your best bet for a taste of Naples sweets.