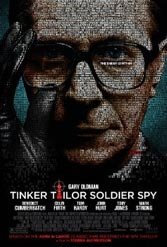 Fans of John Le Carré know that his best George Smiley novels are also his most intricate. They are Matryoshka dolls whose concentric insides contain riddles and puzzles intended to confound assumptions and upset the linear. The complication matters because Swedish director Tomas Alfredson’s elegant film doesn’t quite qualify as self-sufficient. Know Le Carré’s celebrated novel and you have a leg-up on the progressive seepage. Absent such knowledge, the goings-on can seem like pretty fog.

It’s 1973, one of many particularly chilly Cold War years. The former head of British intelligence, Control (John Hurt), is convinced a Soviet mole helped engineer his ouster. From forced retirement, he calls in a favor, dispatching a trusted agent to Sofia to track down a lead. End of agent, or so it seems. This meticulously framed period-piece opening leads to the summoning of semi-retired MI6 agent George Smiley (Gary Oldman), among Control’s protégés, who was also forced out. If a mole exists, why not let an ex-spy find him, or so the Home Office reasons. Control left clues, which Smiley probes, second-guessing a can’t-miss project known as Operation Witchcraft and combing through background of the four-man senior intelligence brain trust. Hence tinker, tailor, and soldier… but who’s the spy?

Oldman, looking far older than his years, is an unusual Smiley. He’s a Cheshire cat with a laconic, minimalist demeanor that borders on self-effacement. Though Le Carré built Smiley around such contrived introversion, its nature transmits poorly to the screen. Oldman’s Smiley, while painstakingly sculpted, borders at times on unsafe blankness. Each of the brain trust figures (Toby Jones, David Dencik, Ciarán Hinds and Colin Firth) performs admirably, mixing the right doses of arrogance, envy and paranoia, and Benedict Cumberbatch shines as Smiley’s young assistant Peter Guillam. London of the early 1970s also gets perfect treatment. What’s missing here, amid the well-spun wheels within wheels, is a palpable hero. For Le Carré, heroes didn’t exist, at least not in the spy game, but whittle back the protagonist in a two-hour spy movie and you’re left with little but handsome shadows.