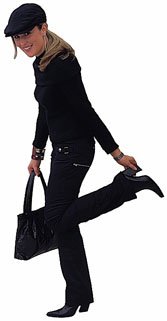 t’s that time when winter drifts into spring but neither season really has the upper hand. It’s starting to warm up, but it’s still too soon for me to break out my beach clothes. I’m from Miami where tank tops and sandals can be worn year round. But Rome isn’t exactly tropical in March and April. A quick scan over my closet hits me with the feeling of “This is soooo last year.” So, I decided it’s time for a makeover, and some shopping.

For me, shopping is like playing with fate. I think over my purchases long and hard, like one might contemplate buying a house or moving to another country. I always say to myself, “Do I really like this skirt or do I really want to spend this much?” Then, I put the skirt back on the rack and decide if it’s still there tomorrow, after I’ve had enough time to check out the deals at other stores, then it really must be fate. It was destined to be mine.

I love clothes. Being on a budget doesn’t allow me to dress like a Fifth Ave. or, in this case, a Via Condotti diva, so I have to do a little digging around. But lucky for me, in Italy, there are bargains aplenty. My mission: buy a new outfit for under €100.

First Stop: Via Condotti. It’s the best place to window shop and get ideas for my new outfit. I stroll past Dolce & Gabbana, Chanel, Cavalli, and other couture shops to see what’s in style. Along the way, I also grabbed Vogue, Glamour, and Flair for some much-needed advice. This season, pastels and rainbow-like stripes are what’s in. But I’m not feeling the Easter egg look. I opt for the sleek and sheek, a woman never goes wrong with black.

Via Tiburtina. You won’t find Naomi Campbell or Claudia Schiffer shopping here. But then again, neither would I if I was a supermodel. Mezz’Euro is probably the last place you’d expect to find must-have accessories. I picked up a funky, Indie, multi-colored sequin wristband bracelet for one euro and a black plastic ring for 50 cents. What a bargain!

Viale Libia. Everywhere I look, I’m surrounded by signs that scream “Saldi, Saldi!” At Stelle I found the cutest black turtleneck, off-the-shoulder shirt. As soon as I caught sight of it, I thought of a million-and-one combinations that would work perfectly with it. The price: five euros. Sold!

Piazza Gimma where I picked up the perfect black pleather purse (that’s plastic leather) for just five euros from a street vendor. Note: Street markets often have great deals on clothes but sizes run small in Italy. Most street vendors don’t have a place for you to try on your clothes and you can’t return it if they’re nowhere to be found the next day! Which means if you were blessed with J-Lo hips like me, it’s best to stick to buying pants and skirts from stores.

Via Candia. At Riflessi, the Saldi signs drew me in quick. Of course, my boyfriend wasn’t exactly thrilled about accompanying me on my makeover mission. Note to the ladies: Never bring your boyfriend or significant other with you shopping. They’ll just upset your flow of concentration and their advice on clothes never really helps. Exceptions, however, can be made for those males actually financing the makeover. At Riflessi, I found the cutest black pants with buckles and zippers everywhere. It was “Sex in the City” meets “The Matrix.” The price tag read €65. Not exactly a bargain. So, I played my game of fate. “If it’s here tomorrow, it was meant to be.” I left the store empty handed.

Piazza Vimercati. On Tuesday and Thursday mornings, this part of town known as Nuovo Salario has one of the best street markets in Rome. Most of the time, street vendors have the same trendy accessories that stores have, but for a third of the price. Some say diamonds are a girl’s best friend. But I say a great pair of earrings are, because once you find your match they’ll compliment just about anything you wear. For three euros I found a pair of long silver dangly earrings.

Corso Trieste. At Oviesse, I found the coolest black golf cap. The price was just €4.90. Sold!

Via Candia. I went back to Riflessi after some long debating, and decided I might get “The Matrix” pants after all. As soon as I walked in the girl remembered that I had been in there earlier and how much I liked them. She said to me, “Chiediamo il grande capo se lui puo fare un sconto per te.” Basically, she was going to ask her boss if they could give me a discount. She came back and told me “Il Grande Capo” would sell them to me for €30. Molto gentile, her capo. Finally my outfit was complete and I didn’t break the bank!