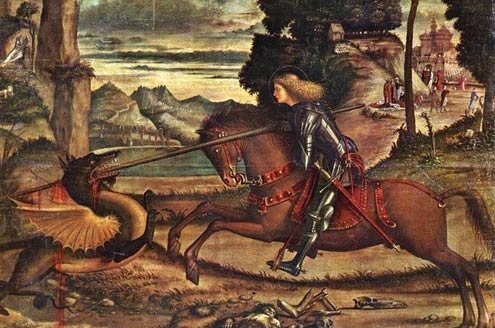 Lions, and tigers, and bears, and... dragons.
T

ime standing still is for fables. The tower-bound princess remains frozen in her tower to ensure her handsome rescuer stays poised to save her. The dragon’s gills are permanently fire-puffed and the witch’s cauldron bubbles without end.

But Rome doesn’t need the rearward spool. Nested among its own ruins, time’s impact is approximate. Take some of the ad posters in my neighborhood. One announces an exhibit of World War II photographs, the other the promise of a political candidate. I pass them almost daily.

What’s peculiar about the ads is that the show ran mid-2010 and the political candidate stood for office nearly two years ago. He has since been arrested and charged with embezzling local funds. But not according to the timeless poster, which hails him as “a new force.”

In Rome, the new is a lab rat on a loop. Forward charges, success, disgrace, and disappearance merges with revival, return, and disappearance anew, making one poster good for two decades. What goes round comes round before helping itself to seconds and thirds.

Why displace near-natural cycle of self-replenishment? A Cezanne exhibit in 2009 will likely become another in 2011, and again three years later, with only the venues changing. Same with the World War II images, a show that left Rome and moved to Milan, with a new one set for Rome in March 2013.

The outdated posters don’t age because all they advertise is on a loop.

Presuming, that is, you know World War II even existed.

At dinner recently with a young friend — an American in his 20s — I mentioned Mark Clark and the Fifth Army, and the Allied landings at Sicily and Anzio, and he looked at me saucer-eyed. He knew about Hitler yes, but nothing more. What American liberation?

Later, recalling my youth, I mentioned waking for months on end to 1970s radio reports about terrorist victims, wounded or shot dead by the Red Brigades. Awesome! Terrorists in Rome! Another discovery.

Time standing still is for fables, and also, potentially, for a generation that lives for what it knows now, today, with yesterdays limited to personal experience, ex-boyfriends, college days, and the daily influx of viral events.

Basing likes and priorities on incidental knowledge doesn’t help much with exhibits, since it leaved many watchers estranged from the past to which they’re being exposed, whether Cezanne’s France or world wars. Gazers are present only to enjoy the app-generated act of visiting, absorbing, and maybe being briefly awed. Out of reach — aside from HBO reincarnations — are the nervous tics of mortal time.

Politicians appear, disappear, reappear; musicians tour, entertain, retire; museums exhibit and recycle — a leitmotif continuum that Rome’s backwater posters celebrate, as if to remind passersby that eternalness has a unshakable home and that most of tomorrow is likely to resemble aspects of yesterday, no harm done.

All well and good until you come upon the likes of my friend, whose yesterdays are too reticent to inform a tomorrow. Absent the facts and fables of time’s arc, he’s deeply impressed by all he doesn’t know. He is eager to temporarily imagine rearward — apps to stir up wars, emperors, gladiators, temples, terrorism (even dragons and vampires) — while compelled to remain detached from the substance of candle-lit, pre-Wi Fi world to which most of history’s actual once-upon-a-time belongs.