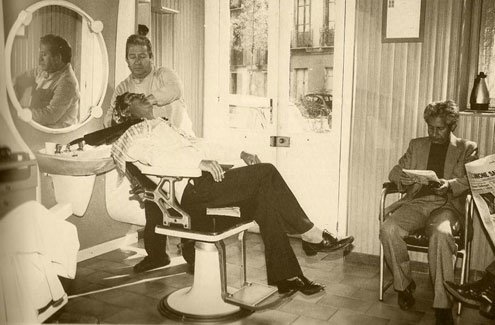 The argument about when to close cuts deeper than a mere haircut.
I

n a Rome barbershop Alfredo and Pino are arguing about the right to work. But this isn’t a debate about civil liberties or minimum wage. Nor is it about workplace health insurance, since “socialist” Italy affords universal coverage. Instead, they’re arguing hours and days off — not the details but the metaphysics of supply, demand and saturation. Their argument reflects changing times.

Long fettered by a slew of Catholic Church-mandated holidays, an assortment of blue laws, and a logical reverence for Sunday, Italy was at best a 9-to-8 p.m., Monday-through-Friday workplace with an ample two-hour break in between. Until the early 1990s, most restaurants closed once a week by law, with barbershops operating under the uniquely Italian Sunday-Monday principle: Sunday closed with Monday as the national barbershop weekly closing day, a set-up that still persists in Rome.

Liberalization and economic crisis produced an array of new laws granting businesses the discretionary right to work longer. First came the so-called Bersani Decree, really a series of decrees that loosened government stranglehold on working hours. Many restaurants did away with the weekly shut day and countless shops cut out afternoon closures. Many but by no means all.

In 2011, with Italy reeling, a new set of measures essentially gave businesses the right to set their own days and hours, apparently freeing up the market once and for all. But once was not all, since small business owners fought chain stores eager to stay open late and won an Italian supreme court battle that took up a complaint in Florence and ruled the unrestricted free market unconstitutional. The national government and regions should still have a hand in avoiding “reckless” competition.

To call this confusing understates the reality. In tourist-driven cities, Rome included, major stores and businesses are often open on Sunday and ignore holidays. But staying open after 10 p.m. (restraints exempted) remains taboo, making North American 24/7 a pipe dream. Some family business still shut in the afternoon, though most are increasingly unable to take the financial hit. Chain stores, the first to champion deregulation, behave erratically, with hours varying depending on the chain and its politics. Few food stores are open past 8 p.m.

For Pino, complete and unfettered marketplace rules should govern all businesses, including barbershops. He wants any owner or any chain to set their own times free of any concern aside from profit, thereby favoring the creation of new jobs and new working hour slots. Unions should stay out of the way (they’ve been very much in it). Insisting on closing times and days is regressive and foolish. Leave all open and let the public decide when to go.

Alfredo, who owns the store, couldn’t disagree more. The issue of time off has become political, he tells Pino, with larger stores aligning themselves with the political parties that most favor their position. If one chain pushes to 10 p.m., a competing one follows — but not for commercial reasons. Worse, he adds, state holidays, religious and national, were not just the product of union whims, but created to ensure family time. Yes, he says, the marketplace matters, but over-peddling that same marketplace by making it constantly available implicitly tempts people to shop, saturating them with options they eventually feel they can’t do without. It’s force-feeding disguised as free choice in the name of a hobbled economy.

Would Alfredo stay open on Sunday and Monday if he could? “No. Those are rest days, which are just as valuable as working days. The problem is how time is valued. If money is the only value there’s obviously nothing to talk about.”

Pino says it should be, since Italy has an unemployment rate of more than 10 percent, a figure that sits at nearly 40 percent among the 21-to-35 generation. “You make hours; you make jobs; you make income. It’s that simple.”

Whether it’s in fact that simple is by itself anything but a simple question, since each man’s position contains ingredients of common sense. Pino is right: capitalism is not capitalism unless it does its best to encourage work. Alfredo is right: failing to understand the intrinsic value of downtime gradually grooms a system of daily stress that can erode the capacity to want to relax, a potentially inhuman prospect.

Three years after the Mario Monti government issued its massive workplace liberalization as part of its “Save Italy” decree, doubt is creeping in. Parties are divided. Union leaders are exacerbating the divide. Chambers of commerce worry both about a retreat into “enforced” leisure, a choice they see as inviting further economic woe, but are concerned also that opening 24/7 possibilities on weekends would all but destroy family businesses, with consumers shopping only when smaller shops are closed. Pro-Sunday closing groups are proliferating with back to the future zeal.

Pino isn’t budging, but nor is Alfredo. One thinks Italy is rejecting the needs of the commercial future. The other sees commerce as being invited into the living room, “sold” as a choice that once made constantly available becomes an addiction. There’s no end to the debate, and not a barbershop open on Monday.