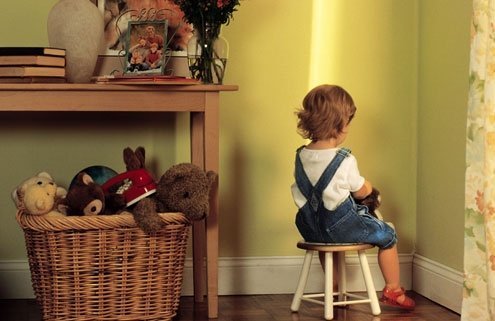 The "time out" concept was born from the notion that all misbehavior will be repeated unless it's underscored as "bad" or unacceptable.
I

first witnessed the “time out” theory of parenting years ago in the waiting room of a doctor’s office while visiting the United States. There was a little boy crying and loudly expressing his distress. He was either bored or scared. His mother suddenly turned toward him and said, “Time out!” The boy whimpered away into a corner, his emotions leaking out through his pores but no longer expressed in any verbal way. I was chilled to the bone.

But what, I wondered, was this “time out” business, and where did it come from? Now I can tell you, if you can bear with a somewhat cynical explanation.

In its early phases, psychology was considered a branch of philosophy. Gradually, however, science (and the technology it gave birth to) grew in value, outstripping the more speculative areas of wisdom. Scientists and their universities received lavish funding during both world wars. Though philosophy might have brought abstract Ivory Tower-style prestige, science brought grants. Psychologists wanted to cash in. They stopped looking into themselves (introspection) for human understanding and chose instead to don the mantle of science.

A school of psychology emerged known as Behaviorism. Its advocates noted that scientists observed the world objectively, using that which was publicly observable as a baseline. They believed psychologists should do the same. But what exactly is publicly observable in psychology? Motivations? No. Perceptions? No. Emotions? Heaven forefend! All that’s observable is behavior. As a result, motivations, perceptions, emotions, experience were banned from scientific psychology. Many radical Behaviorists pretended these didn’t even exist (their own experiences notwithstanding).

It’s very strange that gifted people in a field such as mine come to think some very foolish things. For example, that emotion don’t exist even if psychologists themselves presumably feel them, or that scientists focus only on that which is directly and publicly observable.

The first models of the atom were hypothesized long before technology made atoms observable. Galileo and Newton studied gravity yet no one could see it. Much of science is about creating and then testing explanatory hypotheses.

But for the Behaviorists, only behavior mattered, and that’s just what they studied. For them, probing emotions or experience was very unscientific. They carefully studied how rats learn in a controlled laboratory environment, ignoring the fact that the rats had been deprived of all possibility to explore as they would in nature. They not only drew conclusions about rat learning from these studies, which is far-fetched enough, but applied them to human learning as well.

B.F. Skinner, a key Behaviorist proponent, used rat studies to conclude that people act randomly and learn through reinforcement. It followed that to teach human children we should reinforce the behavior we wanted repeated and ignore the behavior we didn’t want repeated. Skinner couldn’t deny that kids wanted attention (but to say “want” implied an inner, not publicly observable state, so he labeled the wanting in mechanistic terms as something “that reinforces behavior.”)

Skinner’s view of randomness, preposterous even for rats, presumes that emotions either don’t exist or are somehow irrelevant. It also suggests that reward is different from punishment. To Behaviorists, apparently, there’s difference between saying “If you clean your room, you can have candy” and, “No candy because you didn’t clean your room.”

If we don’t want kids to whine, cry, complain, get angry, and so on, we time them out — essentially, we ignore them. Their behavior is not reinforced. Instead, all attention is cut out. It works.

But what does “it works” mean? Yes, they stop whatever behavior we have stopped reinforcing. Does that help their ability to soothe themselves next time they’re agitated? Does it help them regulate their emotions? For the Behaviorists, since they don’t believe in emotions, the problem simply doesn’t exist.

The next question is whether you believe in emotions.

If you do, you may see the “time out” concept as a heartless method of control. If a child is frightened in a doctor’s office, another method to address that fear might be to hold him, to reassure him, to talk to him. If the waiting room makes him anxious or angry, his mother could try understanding his anger and say she’s sorry it’s taking so long. She could play with him — anything that doesn’t make him see his feelings as bad, and unwanted if he feels them.

A host of important maybes follow: Maybe the experience of being soothed and understood will be internalized. Maybe if it happens enough, the child will able to evoke the image of the understanding mother who made him feel better (even when she’s not there). Maybe he’ll be calmer next time. Maybe he’ll be able to feel his emotions and express them. Most of all, maybe he won’t feel he needs to hide from people when he does.